The Raymond von Dran Innovation and Disruptive Entrepreneurship Accelerator (RvD IDEA) has been recognized for excellence in curriculum innovation for entrepreneurship by the Deshpande Foundation. 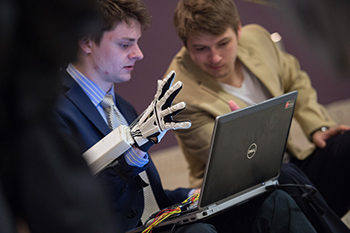 Contact, a student venture that employs the use of a robotic glove to interact with and manipulate computer programs, displays its prototype at the 2015 RvD IDEA Emerging Talk event.

The foundation runs the annual Deshpande Symposium, a gathering that brings together thought leaders in higher education to discuss and share information on emerging strategies and successful practices that encourage innovation and entrepreneurship within university curricula.

Bruce Kingma, professor of entrepreneurship at the School of Information Studies (iSchool), will accept the award on behalf of the RvD IDEA at the symposium, held at the University of Massachusetts, Lowell June 9-11.

“The RvD IDEA is an example of what can be accomplished when colleges collaborate,” notes Kingma. “Our students dream, believe and pursue their ideas to create new ventures, and I am thrilled that the Deshpande Foundation has acknowledged this program for excellence in entrepreneurship curriculum innovation.”

“We are so pleased to hear about this award and appreciative of all the work that Dr. Bruce Kingma did to make it happen,” says iSchool Interim Dean Jeff Station.

“Working together with iSchool faculty members and other contributors from around the University, Bruce did a superb job of highlighting the many successful student stories coming out of our interdisciplinary program,” Stanton says. “We also deeply appreciate the contributions of faculty and leaders from our campus partners at the Whitman School of Management, the S.I. Newhouse School of Public Communications, the College of Engineering and Computer Science and the College of Visual and Performing Arts.” 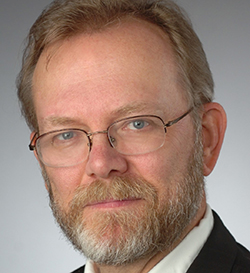 Since 2008, the RvD IDEA (originally called the Syracuse Student Startup Accelerator) has provided support in the form of funding, mentors, coursework and coaching to hundreds of student ventures.

In 2012, the RvD IDEA launched the information technology, design and startups (IDS) minor to enable students to pursue a startup, regardless of their academic major. That same year, the Syracuse Student Sandbox incubator, run under the RvD IDEA, was awarded the prestigious EDA University Center Award, the only such designation in New York State, by the Department of Commerce.

“Thanks to the RvD IDEA program, what started out as an idea in my dorm room has grown into a thriving business with half a million customers, 60 employees, $5 million in venture capital funding and $500,000 in monthly revenue,” says Pete Kistler, co-founder and director of product at BrandYourself, an online reputation management venture.

Kistler majored in information and technology at the iSchool, and with classmates Patrick Ambron and Evan Watson, he co-founded the company in the Student Sandbox’s first class in 2009.

“The Sandbox and the RvD IDEA curriculum were extraordinary in my experience,” recalls Kistler. “They were absolutely vital to our success as a company.”

The annual RvD IDEA Awards competition is the largest student venture competition in New York State, with more than $200,000 awarded annually to venture owners, and serves as the Central New York semifinals for the New York State Business Plan Competition.

The RvD IDEA is named for Raymond von Dran, who served as dean of the iSchool from 1995-2007. Von Dran was a longtime academic entrepreneur who started many innovative programs in higher education and supported student innovation and entrepreneurship at Syracuse University. Shortly after von Dran passed away in 2007, his widow, Gisela von Dran, established the Raymond F. von Dran Fund. She has directed the fund to support the RvD IDEA initiative.