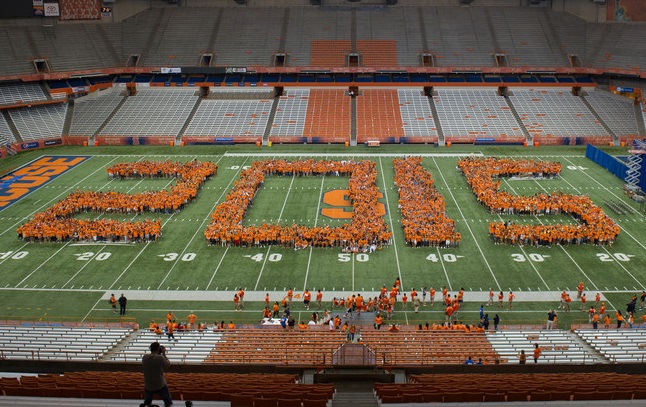 The main ceremony will be held at the Carrier Dome on Sunday, May 10, beginning with the degree candidates’ procession at 9:30 a.m. Graduates of the SUNY College of Environmental Science and Forestry (SUNY ESF) will participate in the 117th Commencement of that college.

Award-winning poet and best-selling memoirist Mary Karr will deliver the Commencement address to the class of 2015 starting at approximately 10:45 a.m.

Syracuse University will confer approximately 5,613 degrees (inclusive of bachelor’s, master’s, doctoral and associate’s degrees, but not including law).

The College of Law will confer 193 Juris Doctor and 18 Master of Laws degrees.

Associate University Marshal is Kelly Chandler-Olcott, Laura J. and L. Douglas Meredith Professor for Teaching Excellence and Professor and Chair of Reading and Language Arts in the School of Education.

More than 70 faculty members and administrators serve as Commencement marshals.

Twelve seniors have been designated as Syracuse University Scholars and three as ESF Scholars. This is the highest academic award given to undergraduate students.

Music will be provided by the Syracuse University Brass Ensemble, under the direction of James T. Spencer, professor of chemistry in the College of Arts and Sciences. The national anthem will be sung by Angky Budiardjono ’15, who is receiving a master’s of music, vocal performance; and the alma mater by Jaclyn Clark ’15, who is receiving a bachelor’s degree in vocal performance in the College of Visual and Performing Arts.

John Hottenstein, professor emeritus of television, radio and film in the S.I. Newhouse School of Public Communications, will be the announcer.

The Commencement ceremony is being webcast live at http://sugrad.syr.edu. WSYR-TV digital 9.2 (Time Warner Ch. 890; Verizon FiOS Ch. 470) will also broadcast the majority of the ceremony starting at 9:30 a.m.