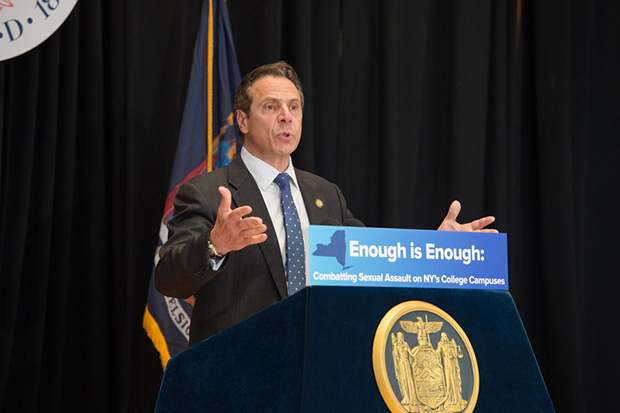 Gov. Andrew Cuomo addresses the crowd at Joyce Hergenhan Auditorium about the Enough Is Enough campaign to battle sexual assault on campuses.

“These private colleges are joining our growing coalition, and together we are taking a stand to say enough is enough: we must do more to fight sexual assault on college campuses,” Cuomo said. “While this issue did not originate here in New York, we have the opportunity and the obligation to find a solution. We must continue to urge the legislature to pass this law and let the students of New York State know that we respect them and their potential and will not let violence go unnoticed or unpunished. We have the power to change the conversation around sexual assault on campus—and if we change it here, the Empire State will be a leader in combating this epidemic across the nation.”

In January, Gov. Cuomo announced legislation codifying his sexual assault prevention and response policy—adopted by SUNY at his direction last year—and applying its provisions to all colleges and universities, public and private, in New York State. By extending the SUNY policy to all colleges, New York’s students will be better protected with comprehensive, uniform procedures and guidelines, including affirmative consent and access to law enforcement.