The Department of English in the College of Arts and Sciences was the bona fide star of the 56th annual conference of the Society for Cinema & Media Studies (SCMS), recently held in Montreal, Canada.

More than 15 people affiliated with the University, including seven Ph.D. students and eight alumni, presented papers at the five-day conference, dedicated to the critical study of film, television, video and new media. 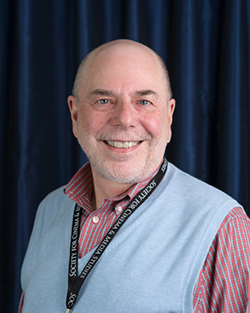 “Syracuse was all over the program,” says Cohan, a University faculty member since 1975. “For some of our presenters, the conference was old hat; for others, it was their first time. Regardless, everybody was well received. There was a buzz about the University.”

Hallas agrees, adding that the English department, despite its relatively small size, made itself known. “SCMS covers a lot of ground,” he says. “In addition to film, TV, and popular culture, the conference examines gaming, social media, and fan and audience studies. This is the kind of work for which Syracuse is known.”

The University’s success at SCMS was indicative of its upwardly mobile English department—specifically, its graduate curriculum in film and screen studies and the film and screen studies track for undergraduates. That the department offers specialized training in criticism, theory, research and teaching presumably makes it a good fit for SCMS and vice versa—creating a kind of “pipeline of talent,” as Hallas puts it.

One of the participants was Staci Stutsman, a Ph.D. candidate and teaching associate. She says the conference was “immensely rewarding” because it provided opportunities for information-gathering and networking, relative to her dissertation topic. It also marked her first time presenting at SCMS.

“I was able to have rich conversations with top scholars in my field, which, in turn, deepened professional and personal relationships with my own faculty and peers,” says Stutsman, who presented a paper and led a panel discussion on “Femininity in Contemporary TV Dramas.”

Stutsman has nothing but praise for Cohan and Hallas, saying they have fostered a “supportive” environment at Syracuse, where academic mentoring and modeling go hand in hand. “Having all of us there [in Montreal] … made visible the dense network of connections within our community,” she adds. “Almost every night, we had dinner together and talked about the papers we had heard, the ideas we had learned, and how they were beginning to impact our research.”

An expert in Hollywood cinema and popular culture, Cohan takes the praise in stride. He says that, in addition to having the only English department that is an SCMS institutional member, Syracuse prides itself on gilt-edged scholarship.

“The University was an early member of SCMS, back when it was called the Society for Cinema Studies,” he says. “Today, much of what we do in the English department—and at SCMS—is grounded in theory, history, archival work and interpretation. Our approach is humanistic, as opposed to VPA’s or the Newhouse [School]’s, which is based primarily in art practice or the qualitative and quantitative methods of the social sciences.”

Adds Hallas: “Syracuse is a great place for a humanities-based film scholar, because of the collaborative opportunities it offers with colleagues in VPA and Newhouse.”

This ethic is readily apparent in Lindsey Decker’s research, which is ostensibly interdisciplinary. “My work is situated at the intersection of three somewhat disparate sub-fields: horror studies, British cinema studies, and transnational approaches to cinema studies,” says the fifth-year Ph.D. student, who, like Stutsman, is a teaching associate. “The conference enabled me to meet another scholar with a similar set of intersecting interests. It turns out that he knew many other scholars of our subspecialty.”

In addition to presenting a paper, Decker, at Hallas’ behest, chaired a panel on “Transnational Hybridity and the Contemporary European Horror Film.” “It allowed me begin thinking about my next research project, which I will start, in earnest, after I finish my dissertation,” she adds.

On July 1, SCMS President Barbara Klinger will hand over the reins over to Cohan, who chaired the conference’s programming committee. “Steve did a stellar job of leading the 20-plus-person committee, which selects and helps organize the many panels and workshops,” says Klinger, who also is provost professor of communication and culture at Indiana University Bloomington. “As president-elect, he brings to SCMS a wealth of academic and administrative experience. His energy and sense of vision will benefit us for years to come.”