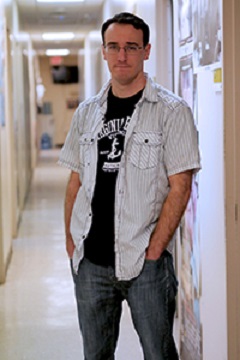 As he prepares to graduate this Sunday, senior Matt Fernandes reflects on what bit of wisdom he would pass on to future Syracuse University students.

First, dream big. Then figure out how you achieve it.

“This sounds like such a general statement, but it’s about not being afraid of the idea,” says Fernandes, who is a University Scholar and this year’s student speaker at Commencement. “Because even if the University doesn’t have the resource to help you achieve your vision, there are people here who are willing to help you find the resource.”

Fernandes, a dual major in English and textual studies and television, radio and film (TRF) in the College of Arts and Sciences and the Newhouse School, respectively, has seen how many students have taken advantage of the possibilities, including the high-achieving University Scholars, several of whom are doing important research and have been awarded prestigious scholarships.

He found out for himself how to dream big while working on his honors capstone project, a docudrama titled “American Voices,” which is based on slave narratives written before the Civil War.

“The thing I learned in producing this film is you never know what you’re going to get until you ask,” Fernandes says.

A year of research

“I spent a year reading slave narratives, doing research and researching authors,” Fernandes says. He drafted a script for the documentary, which includes dramatizations from slave narratives, including those of Frederick Douglass and Harriet Jacobs, and interviews with scholars in the field.

“The major goal of the project was to bring the slave narratives to public knowledge and to provide a visual document to students of American history,” Fernandes says. “I wanted to create a film to talk about the writers and what they went through and what the effect was on literature and history and why that’s important today.”

He also notes it was crucial that he was respectful of the content and represented it responsibly, since it is a story so important to African American history.

The texts are “difficult to read” at times, with graphic, violent references, and Fernandes was careful in how he showed the brutalities, but he also found importance in representing what he saw as a triumph of spirit.

“There is a narrative of the durability of the human spirit,” Fernandes says. “It’s a very American story.”

As a member of the a Renée Crown Honors Program, Fernandes applied for funds from the program and through the TRF program to travel to do interviews at Harvard and the University of North Carolina at Chapel Hill. 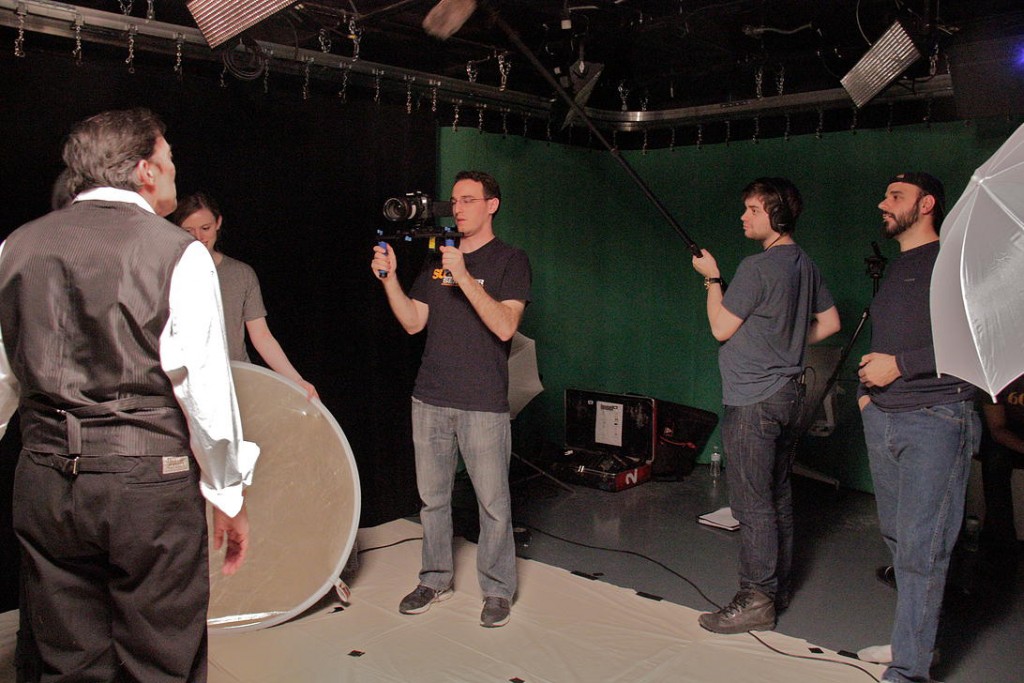 Matt Fernandes works with the actors and crew during the filming of “American Voices.” Photo by Annemarie Menna

“With the University resources, they made this possible financially and allowed me to learn and grow as a filmmaker,” Fernandes says.

The final piece was shown for the first time this week for his TRF capstone class. He hopes to show it for a wider audience at a later date.

His film project was one of many opportunities he pursued while at Syracuse. He was a member of Orange Seeds, an orientation leader and a member of the First Year Players, and he spent a semester at the Syracuse University campus in Los Angeles reading scripts as a development intern for Atmosphere Entertainment, among other activities.

It was important to Fernandes to find opportunities to get involved and ways to contribute to community, which in turn shaped his time at Syracuse.

As an orientation leader, Fernandes recalls how he spent a Winter Welcome dinner event with a group of international students and how they connected through a word game.

His experience led him to pursue further ways to engage with more people from different parts of the world; he took coursework in cross-cultural literature and joined conversation partner programs to help international students learn English.

“A lot of my academic universe started to become more about how America was diversifying,” he says. “It allowed me an expanded sense of the world.”

Something he will draw upon during his speech at Commencement.

Fernandes, who was chosen by the University Scholars to be the student speaker, hopes to impart his ideas about the importance of learning how to communicate and the responsibilities of graduates going into the world.

“We are becoming increasingly global and we’re also increasingly using social media to communicate, which often gets criticized for being distracting or isolating,” Fernandes says. “The idea that I want to represent in my speech is that the reality of these things exist so how do we reconcile these as graduating students going out into the world.”

Fernandes, who was chosen as an alternate Fulbright Scholar to teach English in Malaysia, plans to move to Los Angeles to begin pursuing work in film production.

“As we move out into the world, any job that we have is going to have some sort of global connection,” Fernandes says. “A big point for me was in seeing myself as part of the world, trying not to think about country or cultural boundaries but seeing people as people and interacting with them on a personal level, despite language barriers. It’s a very freeing experience.”