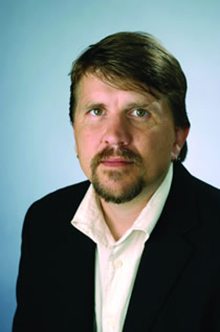 As part of his five-year term, Parks will oversee the publication of two to three scholarly books a year.

“This is an opportunity for me to gain the broadest possible perspective on the field—where it’s going, what it needs to succeed and how to empower scholars who are shaping the future of our work,” says Parks, who also serves as the writing program’s director of graduate studies. “My role [as editor] is to meld different conversations and traditions together to see what new insights arise.”

It is in his twin role as editor and teacher that Parks excels at linking community publishing with grassroots activism—an idea born out of the efforts of the Federation of Worker Writers and Community Publishers in the United Kingdom.

“Service learning and community partnerships can shed new light on the nature and goals of political and social movement rhetoric,” says Parks, who also served as editor of Reflections: A Journal of Writing, Service-Learning, and Community Literacy.  “I hope to draw upon my experience as publisher and editor of community and scholarly publications to build on the outstanding work being published in the SWR series.”

Lois Agnew is associate professor of writing and rhetoric and chair of the writing program. “This appointment is a tremendous opportunity for Professor Parks and the University,” she says. “He is in a unique position to identify influential work and rhetoric as it emerges—something that could pay big dividends for our students. I can’t think of anyone who can better articulate the social, political and material contexts of writing and its teaching.”

Parks is the author or editor of numerous books, including the second edition of “Class Politics: The Movement for the Students’ Right to Their Own Language” (Parlor Press, 2013), “Circulating Communities: The Tactics and Strategies of Community Publishing” (Lexington Books, 2011) and “Gravyland: Writing Beyond the Curriculum in the City of Brotherly Love” (Syracuse University Press, 2010). A former Temple University professor, he earned all his graduate and undergraduate degrees, including a Ph.D., from the University of Pittsburgh.