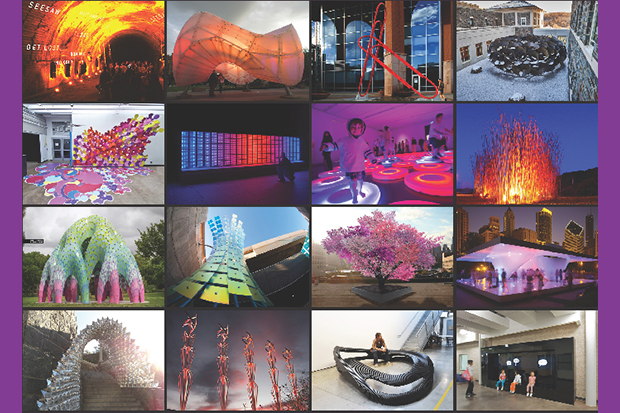 A public outreach meeting to evaluate the 16 semifinalists will be held Tuesday, May 5, from 10 a.m. to noon at the Nancy Cantor Warehouse.

Two hundred seventy-six artists from 17 countries have applied. Now, the jury will be selecting finalists for the Connective Corridor’s $650,000 call for public art—a partnership with the University’s Office of Community Engagement and Economic Development and the College of Visual and Performing Arts.

The project is one of the largest public art calls in the country, funded through a grant to the Connective Corridor project from Empire State Development.

Campus members are invited to the fourth floor conference space in the Nancy Cantor Warehouse on May 5 from 10 a.m. to noon for a public outreach meeting to evaluate the 16 semifinalists selected by the jury. The community is invited to provide input to the jurors as part of the final selection process. There will be an opportunity to learn more about the artists, evaluate their work and talk about where public art should be sited along the Connective Corridor. The jury will select the winners in late May.

“Under the direction of VPA faculty, students from the College of Visual and Performing Arts will not only have access to the various phases of this project, from the development of the call for entries, to the jury selection and reviews, but will be directly involved in interviews with the finalists and the planning and installation of the artwork,” notes Lucinda Havenhand, associate dean of VPA and a member of the local steering committee for the project. In the fall 2015 semester, artists selected as finalists will travel to Syracuse, where they will present and interact with students. “Students will not only be able to attend presentations on their projects, but join in the dialogue about those projects, ask questions, visits the sites and actively observe the final selection process. When finalists are selected, students will be able to then volunteer to help each of the artists chosen with various aspects of their project’s development. This may include visiting the artists in their studios and helping them with fabrication and installations.”

The opportunity for hands-on involvement with these projects adds immeasurable benefit and richness to the student experience, adds Havenhand. “It provides an opportunity to interact directly with this group of artists from all over the world and the processes of this competition. In doing so, this project not only expands the classrooms of Syracuse University into the larger Syracuse community through the duration of this project, but also helps create in its realization a ‘City of Art’ that students can learn from for years to come.”

Marilyn Higgins, vice president for Community Engagement & Economic Development at Syracuse University, adds, “Now the Connective Corridor has attracted world-renowned, high-caliber artists from around the world to the streets of Syracuse. This is what the Corridor was meant to do. The College of Visual and Performing Arts, our office and the community are demonstrating incredible tenacity, creativity and teamwork in bringing this phase of the Corridor to fruition.”

Sixteen artists were chosen as semifinalists out of 276 from around the world who applied.

Jury members provide a global perspective on public art, as well as familiarity with Syracuse. They include: