Seniors Show their Colors at Commencement

This year, graduating seniors who give to the 2015 Senior Class Giving campaign will be easy to spot at Commencement. For the first time in University history, seniors will wear a special orange, white, and silver cord with their cap and gown, to mark their donation. Although the 2015 campaign runs through the end of June, to receive a cord in time for Commencement, seniors must make a gift by May 6. The cords will be distributed at the Senior Picnic on Shaw Quad on Thursday, May 7. 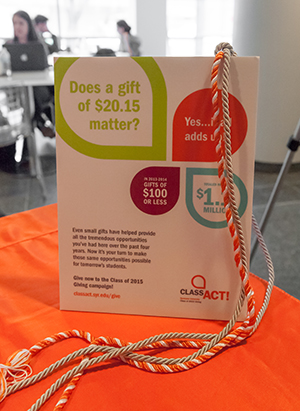 Seniors who give will receive a special orange, white, and silver cord to wear with their cap and gown.

While any amount is gratefully accepted, seniors who give at least $20.15—in honor of their class year—will receive the cord, according to Kristen Duggleby, assistant director of leadership annual giving. “Sometimes people don’t give because they think $20.15 doesn’t amount to much, but that’s not true,” she says. “Giving a little bit does go a long way. That $20 really adds up. Last fiscal year, gifts of $100 or less added up to $1.1 million.”

So far, it’s been a record year, with more than 300 seniors stepping up to give. Duggleby credits the dedication and enthusiasm of the members of the Class Act committee with the campaign’s success. “The committee members are really passionate about getting the message out to their classmates,” Duggleby says. “It’s not easy to ask for money, but they’ve really taken the ball and run with it, talking about the campaign to their classmates every chance they get.” The group has been so persuasive that they’ve even convinced underclassmen to donate.

Donors can choose to give to whatever part of Syracuse University means the most to them. Maryann Akinboyewa ’15 specified her donation to go to the Martin J. Whitman School of Management and the Remembrance Scholarship, which honors the 35 SU students who lost their lives in the bombing of Pan Am 103. “I had the pleasure of being a Remembrance Scholar this year and I’m grateful to have had the honor to work with 34 other student leaders on campus,” she says. “And it’s a pleasure to give back and support future Whitman students.” Kyle Fenton ’15 designated his gift to support Otto Tunes, the a cappella group he helped found. “Without giving, the organizations and programs that exist within the University would stop functioning,” he says. “It is the people who selflessly give that allow these programs to grow and excel.”

Also new this year, students get to sign their names on a “leaf” and hang it on a symbolic giving tree. “We’ve never had a tangible way to recognize students’ commitment to giving,” Duggleby says. “But the reaction to the giving tree has been huge. Students see it and ask questions about it, then they want their name to be there, too.” The tree has been displayed at numerous places and events around campus, including the School of Education, the Grad Fair and Whitman Wednesdays. (See photos.) It will be prominently featured at the Senior Picnic on Shaw Quad, where Duggleby and the Class Act committee hope it generates continued interest and inspires graduates to support the University.

“This class has been so generous in creating a legacy of giving to the University,” Duggleby says. “We hope as they go on with their lives as alumni, they will continue to maintain that connection.”