Komal Safdar committed to come to Syracuse University as a junior in high school because of its tennis program. It was the only program in the country that trained its players to go pro after college. The biochemistry major from Cincinnati, Ohio, no longer wants a career as a tennis pro, but she is still glad she picked Syracuse. Her time here gave her opportunities to push herself and prepare for her ultimate career goal, becoming a physician. 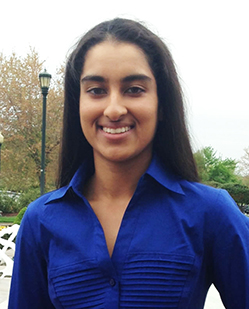 Q: Being a student and an athlete at the same time is notoriously difficult. How have you managed to excel at both?

A: It comes down to time management. You can’t leave anything until the last minute, and you have to plan out weeks at a time. There is time to fit it all in, but you sometimes have to say no to a movie or a social outing. Sometimes you do have to make a sacrifice. In the end, you will make time for the important things.

Q: And you certainly have excelled, doing well at tennis for four years and winning several academic awards. What are some of the awards you’ve won?

A: I was named to the Golden Key International Honor Society and the National Society of Collegiate Scholars, as well as the Big East All-Academic Team and the All-ACC Academic Women’s Tennis Team. I’ve been named the Scholar-Athlete of the Week three times. I won the Thacker Postgraduate Scholarship Award, which is given by the ACC to three student-athletes each year for elite athletic and academic performance. And I won the award for Outstanding Achievement in Biochemistry, which is given to one biochemistry major each year.

Q: What are some of your other activities?

A: I do research in the lab of Professor Eleanor Maine, studying the mechanism of C. elegans’ germline development in relation to the GLP receptor. We have specifically worked on isolating a single, but critically important gene in a conserved signaling pathway that regulates the glp-1 gene.

I belong to Phi Delta Epsilon, a pre-medical fraternity. We volunteer at blood drives, attend educational banquets and have discussions about current health policies and common ethical controversies in science. We also have the opportunity to talk to current medical students, doctors and medical admissions staff. Members have mentored me about applying to medical school, and I will mentor others.

I’m also the president of the Student Athlete Advisory Committee, which liaises between athletes and coaches and administrators, plans life skills events, promotes unity among athletes in different sports and represents Syracuse athletes to the ACC.

Q: What are your plans after graduation this May?

A: I’m applying to medical school for the fall of 2016, so I’m going to take a gap year. I plan to spend most of that time doing research, and have a couple of opportunities in mind, either at the University of Cincinnati or at the Cincinnati Children’s Hospital. But I also hope to spend some time traveling—to Pakistan, where I have family, and to Europe.

Q: What type of doctor are you hoping to become?

A: I’m not sure yet. I’m considering nephrology (kidney treatment), which is my dad’s specialty, or general practice.