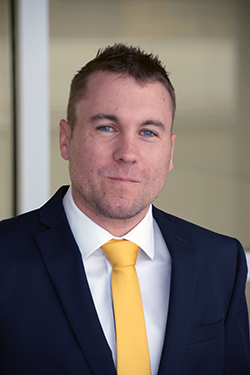 Will Geoghegan, assistant professor of management at the Martin J. Whitman School of Management has been named one of the World’s Best 40 Under 40 Professors by Poets and Quants. The annual listing highlights “excellence in research and teaching prowess,” according to the website.

“We reviewed more than 100 nominations and factored in student feedback, awards and honors, quantity and reach of research, public speaking and educational qualifications,” says Andrea Carter, who helped compile the final list. “We then sent the final 40 a questionnaire so we could share their lives and work with our readers.”

Geoghegan came to the Whitman School in 2010 as a visiting professor; he became an assistant professor in 2014. He teaches undergraduate and M.B.A. courses in management and also teaches in the MBA@Syracuse program. He holds a Ph.D. in management from the University of Ireland, Galway.