Austin Miller is a senior international relations and economics major. He is an active and involved student, constantly striving to make the most of his time at Syracuse University. He is involved in multiple student organizations, in which he frequently holds executive positions, and has completed internships in both America and Shanghai City, China. After graduation, Miller hopes to pursue a career in international business, applying the entrepreneurial skills he has developed over the past four years. 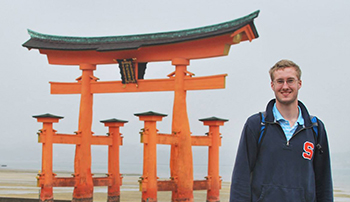 Q: You’ve spent several large chunks of time abroad; what were some of the things you were involved in overseas?

A: I studied abroad in Hong Kong for the Fall 2013 semester. That SU Abroad program focused on the political economy in South East Asia, and also examined current economic and political issues in China. I thought it was fascinating, especially for someone like me, who wants to go into international business. So, after spending the spring semester back in Syracuse, I accepted a summer internship in Shanghai City. I was in China from June to August working with the Blackpeak Group, an economic advisory firm. We served hedge funds, investment banks and other organizations seeking business partnerships and investment opportunities in China.

Q: This trend of business-oriented pursuits seems to have followed you back to Syracuse. What are some of the things you’ve been involved in here on campus?

A: The big one that comes to mind is the Syracuse University Entrepreneurship Club. I served as the president from January to December 2014, and I’m still involved now in my last semester. While president, I organized educational, off-campus trips for members, handling everything from venue selection to reservations to transportation. I also brought in guest speakers and had the opportunity to serve on the Whitman Leadership Committee, developing and debating administrative and student government-related policies as a student representative.

Q: Going off of that entrepreneurial theme, have you pursued any of your own business ventures?

A: Yes, my team and I actually just received a $5,000 reward in the RvD IDEA Awards competition. We designed a low-cost, high-durability AED for use in harsh conditions. An AED is an automated external defibrillator, which is able to treat cardiac arrhythmias, and even cardiac arrest, through low-level electric shocks. AEDs are portable, which is a huge advantage, but their cost runs into the thousands of dollars, they break relatively easily and are difficult to repair once they are broken. My team’s AED will only cost $500 dollars, and is intentionally built to be very durable. You can throw this thing in the back of a van in South Africa and let it sit for seven years, and it will work just fine. Also, our AED runs on a standard camera battery, so instead of having to wait for a new, specialized AED battery to arrive in the mail, users with a depleted battery can just go to the nearest electrical appliance store and get a new one.

Q: So what happens to that award money now?

A: The award money will sit in a university account until we request access to it for our project. Up until this point, we’ve been focused on research and reaffirming our assumptions in regards to common failure points for AEDs in our intended markets. Our next steps are completing our IP work, building some industry partnerships and hopefully getting a prototype into the field for testing. The New York State Business Plan Competition is coming up, and hopefully we’ll have even more good news from that to share here soon.