The winners of the annual Concerto and Aria Competition in the College of Visual and Performing Arts’ Rose, Jules R. and Stanford S. Setnor School of Music will perform with the Syracuse University Symphony Orchestra (SUSO) and guest conductor Geneviève Leclair on Sunday, April 26, at 5 p.m. in the Rose and Jules R. Setnor Auditorium, Crouse College. The concert is free and open to the public. 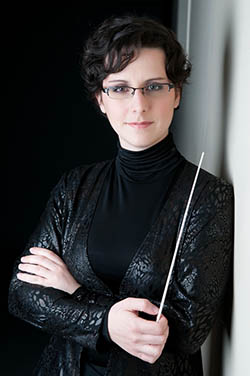 Canadian conductor Leclair was appointed assistant conductor of the Boston Ballet Orchestra at the beginning of the 2010-2011 season and became music director of the Parkway Concert Orchestra in 2013. In March 2010, Leclair was the recipient of the Sir Ernest MacMillan Memorial Foundation Award in orchestral conducting and won, for the second consecutive year, the position of apprentice conductor for the 2010 summer season of Boris Brott’s National Academy Orchestra of Canada.

In recent years, Leclair has had the opportunity to step on the podium of a number of orchestras, including the McGill Chamber Orchestra, Lexington Symphony, Symphony New Hampshire, Longwood Symphony and Brookline Symphony. Active on the new music scene, she has collaborated with soloists of international stature and has premiered pieces by many contemporary composers, including Alan Belkin, Éric Champagne, Brian Harman and Maxime Goulet.

Leclair holds a doctor of musical arts degree in orchestral conducting from Boston University under the tutelage of Maestro David Hoose. She had previously obtained bachelor’s and master’s degrees in flute performance from Université de Montréal, the latter under the supervision of Denis Bluteau, associate principal flautist at Orchestre Symphonique de Montréal. Her other teachers and mentors include Boris Brott, Kenneth Kiesler, Ann Howard Jones, Susan Hoeppner, Camille Churchfield and Jeanne Baxtresser. Learn more at http://www.genevieveleclair.com.

For most Setnor events, free and accessible concert parking is available on campus in the Q-1 lot. If the lot is full or unavailable, guests will be directed to alternate lots. Campus parking availability is subject to change; call 315-443-2191 for current information or for more information about the concert.