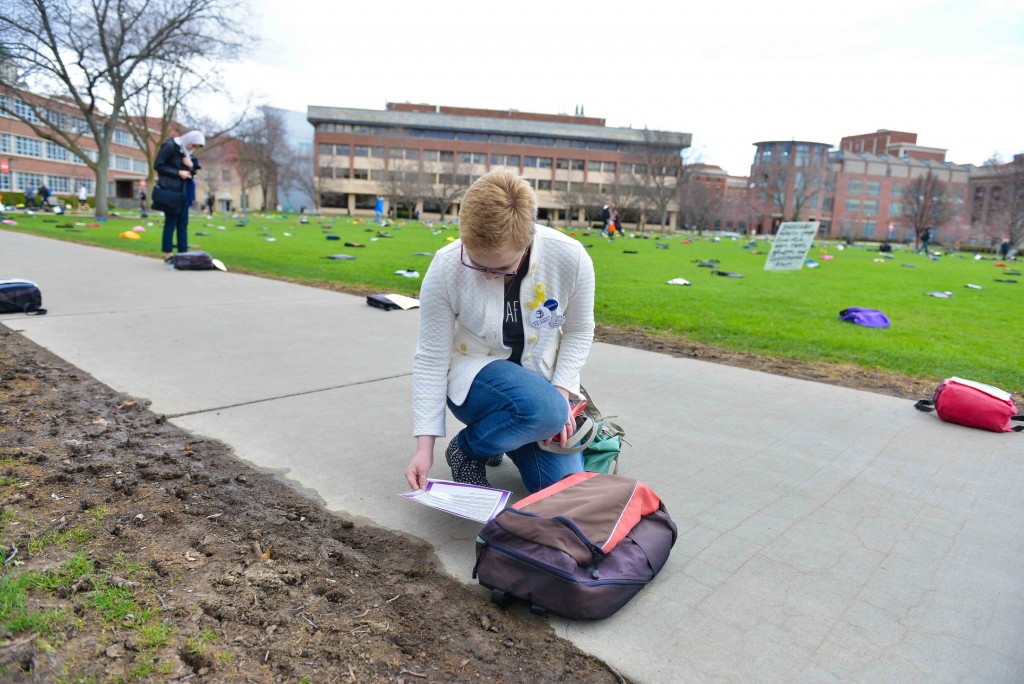 A student pauses to read a message associated with one of 1,100 backpacks as part of the Send Silence Packing exhibition on the Quad Monday. (Photo by Chase Guttman ’18)

Mali Golomb-Leavitt ’15 and other members of the Syracuse University chapter of Active Minds began placing backpacks around the Shaw Quad early Monday morning when she paused for a moment.

The 1,100 backpacks were part of an exhibition through the national organization to represent the number of college students nationwide who commit suicide every year.

“There was this moment when we were setting them all up and then I stopped right in the middle. I looked around and I saw them everywhere; I was totally overcome with emotion,” says Golomb-Leavitt, who leads the Syracuse University chapter. “It’s beautiful and it’s incredible and it’s tragic. And it’s really heartbreaking that these students had to do this when they felt like there was nowhere else to turn.” 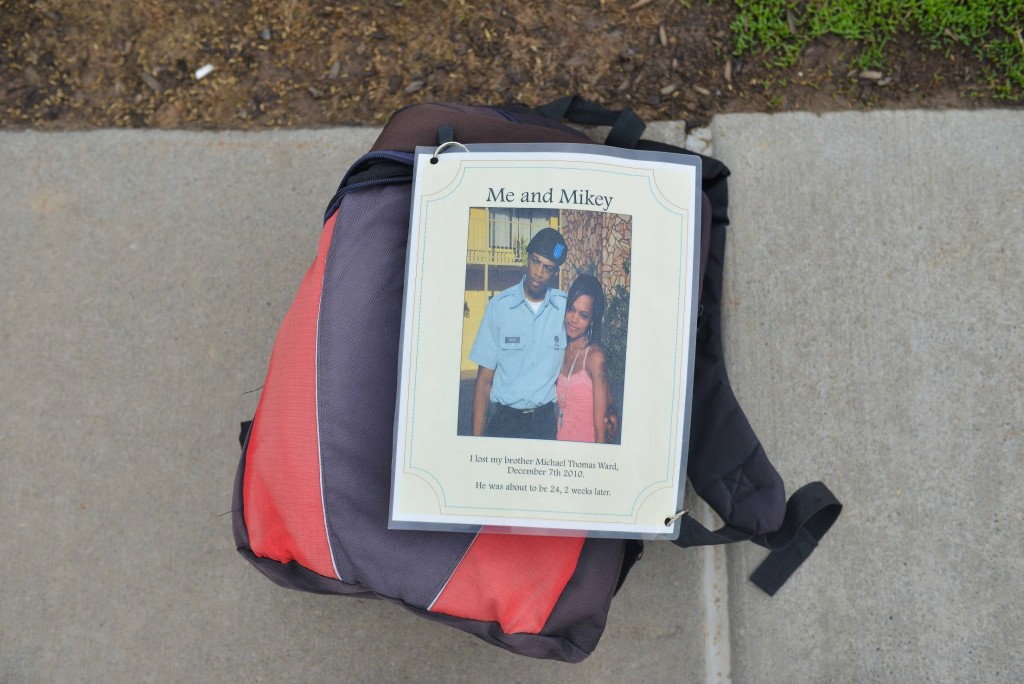 A personal message is attached to one of many of the 1,100 backpacks displayed at the Send Silence Packing exhibition. (Photo by Chase Guttman ’18)

Developed by Active Minds, the Send Silence Packing campaign is a national tour of donated backpacks—many with personal stories attached and mementos of college students who have committed suicide—that brings to light the incidence of suicide (the second-leading cause of death in college students), helps students find out about mental health resources and inspires action for suicide prevention.

“Because I’m graduating, my goal for the year was to have a legacy that this kind of conversation continued to be created and could be spurred for many, many years,” says Golomb-Leavitt, a psychology major.

Through events like this campaign, the members of the Active Minds chapter, which seeks to educate, support and reduce the stigma surrounding mental illness, hope the chapter will become more well-known on campus and allow students not to feel alone in their struggles.

“We want people to start talking about this and feel less stigma and less shame surrounding having a mental illness,” Golomb-Leavitt says. “And if you need help or if you have a friend that needs help, you should be able to access those resources because we have them.”

Any student who is struggling with any mental health issue can contact the Counseling Center, 200 Walnut Place, at 315-443-4715. The center is staffed by experienced clinicians and provides a range of individual and group services for addressing mental health, sexual assault and relationship violence, and substance abuse.

“My hope in hosting Send Silence Packing at the University is that by raising awareness about the incidence and the impact of suicide among college students we will inspire our students, staff and faculty to take an active role in preventing suicide on our campus,” says Susan Pasco, associate director of the Counseling Center.

“The event also highlights the valuable work that the students involved with the University’s Active Minds chapter are doing throughout the year to bring awareness to mental health issues and promote help-seeking behaviors among college students,” Pasco says. 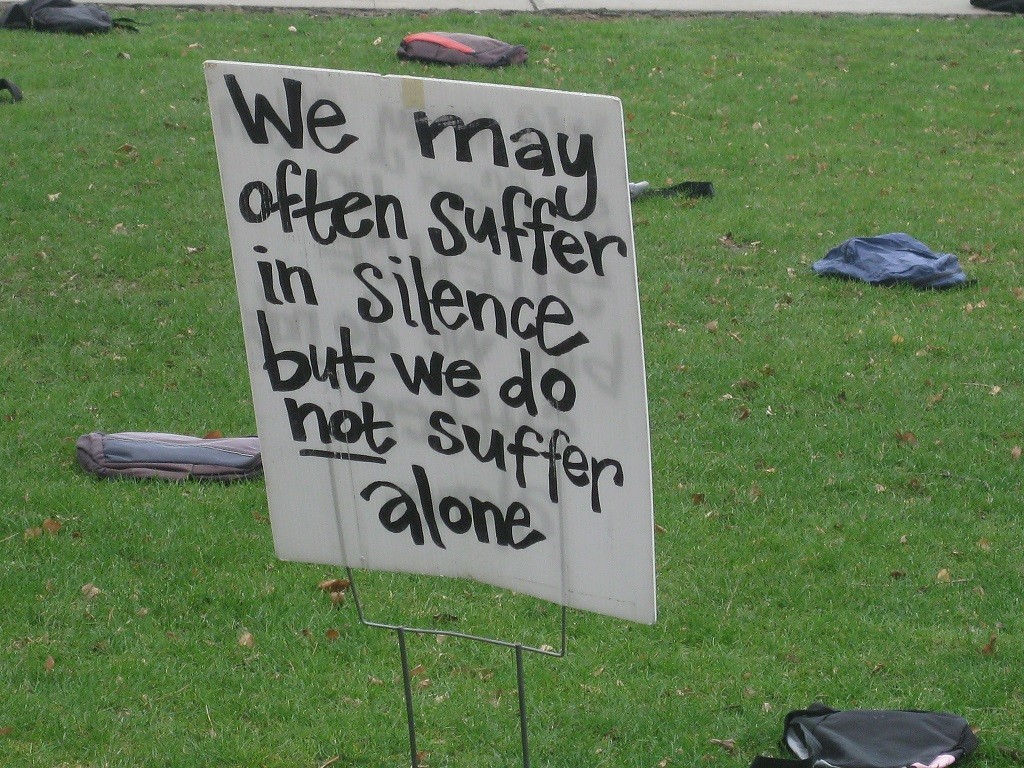 Any student who is struggling with any mental health issue can contact the Counseling Center, 200 Walnut Place, at 315-443-4715.

Many students struggle with issues of depression, anxiety or thoughts of suicide in isolation, and that peer connection is important.

“Often when a student is experiencing a suicidal crisis, the first person they turn to is a peer or trusted friend,” Pasco says. “For that reason, it is important for everyone in our community to know about mental health resources on campus and to be open to listening, reaching out and providing information to those who are in need of help.”

The Send Silence Packing campaign, which was also part of Wellness Week on campus, allowed the Counseling Center staff the opportunity to be at the event to promote the visibility and availability of mental health resources, Pasco says.

Lee Duffy-Ledbetter, the national campaign coordinator, hopes the impact of the exhibition is one of awareness and that these topics are made “just a little more present in people’s minds” through the sheer number of backpacks.

“The visual representation of the statistic is what constructs wonder for people,” Duffy-Ledbetter says.

Mimi Tohill, a roadtrip staff member with the national exhibition, says the exhibition evokes many reactions, including one from a student who walked up and just said, “Thank you.”

“As someone who has had my own struggles, whose friends and family struggle, it’s so easy not to know where to turn,” Tohill says. Through this exhibition, “I’ve definitely seen a lot of people respond with a feeling of hope and feeling like there are other people to turn to. We want students to have spaces and create more spaces to have these conversations.”

To get involved in the chapter’s work, the Syracuse University Active Minds chapter can be accessed on Facebook, Twitter, Tumblr and Instagram through its tag “syractiveminds” and through its email address, syractiveminds@gmail.com. 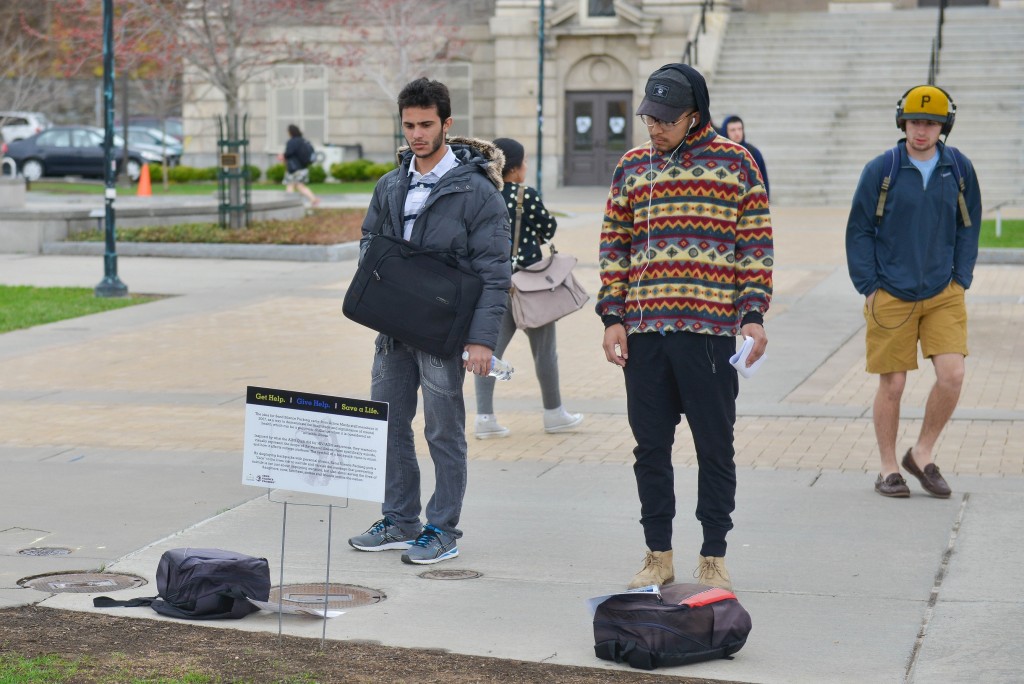 Students read about the Send Silence Packing exhibition on the Quad. (Photo by Chase Guttman ’18)

“We care about this stuff; we have information. We have a great counseling center. We want to give more funding to those resources too, because we need more of them. We need more people seeking those resources as well,” Golomb-Leavitt says.

Golomb-Leavitt was at the exhibition throughout the day, speaking with students and passersby, who stopped to read some of the stories, including a few representing Syracuse University students.

Golomb-Leavitt says she will be processing what impact this event has had on her in the days to come.

“I know that this happens and yet to see it all around you, especially as you sit in the middle of it, you can’t avoid it,” Golomb-Leavitt says. “That’s the whole point of this exhibit. You can’t deny it. You can pretend it doesn’t exist but it really does.”

The Counseling Center is located at 200 Walnut Place (315-443-4715) and its services to students are free, as they are covered by the Student Health Fee. Students should also know that if they are currently experiencing a mental health crisis or have experienced sexual or relationship violence, 24-hour emergency support services are available by calling the Counseling Center. 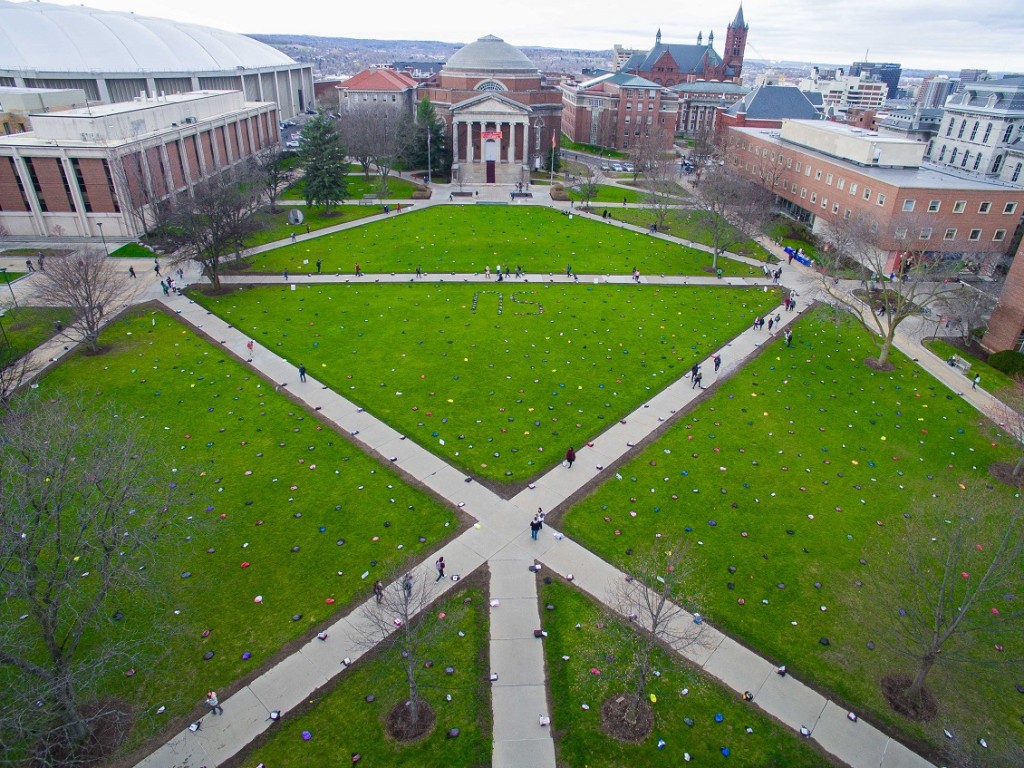