Members of the Syracuse University community gathered Sunday, April 19, for the Cuse Conference, a five-hour dialogue on major issues on campus. The conference was organized by the Student Association, the Graduate Student Organization, the SU Residence Hall Association and the SUNY-ESF Undergraduate Student Organization. The event was open to students, faculty, staff and administrators. 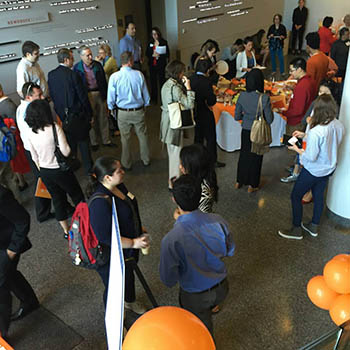 Attendees at the Cuse Conference mingle during a break.

Conversations held between students and administrators in particular were important in the eyes of SA President-Elect Aysha Seedat.

The Cuse Conference even attracted the highest administrator of the University himself. Accepting SA’s invitation, Chancellor Kent Syverud was in attendance Sunday.

The conference began with an orange-carpet reception and an opening ceremony in the Joyce Hergenhan Auditorium in the S.I. Newhouse School of Public Communications. From there, attendees separated to attend any one of four different workshops held throughout the Newhouse complex.

This first round of sessions consisted of panel discussions on sexual violence, public safety, the structure of recognized student organizations and “21st Century values and traditions in 20th Century institutions”. After a brief community forum in Newhouse’s food court, Food.com, conference goers attended a second round of sessions. Panels in the second half addressed extracurricular academia, health and wellness, defining diversity and empowering student governance.

The outcomes of these various discussions were presented in the plenary held at the conference’s end. Chief among attendees’ requests was an improvement in the student experience the University provides.

At the workshop on University values and traditions, participants suggested increased school-sponsored events aimed to promote diversity and a more effective approach to informing freshman students of the many clubs and organizations they can join on campus. The need for more overall transparency from University administrators on top-down decisions was also discussed.

Another common theme of the conference was increased inclusivity and safety. A consensus was reached on the need for better resources to be made available for victims of sexual harassment and violence. Conference goers also had the opportunity to learn more about the jurisdiction and practices of the Department of Public Safety. The workshop on diversity stressed the need to not only be accepting of marginalized groups but to expect them and welcome the contributions they bring to a diverse campus culture.

SA President Boris Gresely and fellow conference organizer Ignacio Auza realized the need for all this during their freshman year at Syracuse.

“I think the Cuse Conference is something everyone on campus wanted,” Auza said. “We are just so happy we were able to materialize this shared vision and are very hopeful to see this continue into future years.”

The collaborative work accomplished at the Cuse Conference in advancing campus dialogues on these many issues affecting the University will be compiled into a summarizing document by conference organizers. The document will detail the participants’ agreed upon suggestions to help provide a blueprint for the future.

“SA and the administration will follow it closely to make sure we can address the issues raised,” Seedat said. “Everything talked about today is solvable—we just need to put the resources there.”

The conference’s keynote speaker was Jesse Mejia ’97, the first Latino president of SA and a role model for Gresely. Mejia graduated Syracuse with a degree in communications and went on to receive his M.B.A. from Georgetown University. He has since enjoyed success in business communications and started his own consulting firm to help young Latinos gain admittance into M.B.A. programs nationwide.

In his address during the closing of the conference, Mejia praised the level of diversity both in the University’s student population and the Student Association itself that has increased since he graduated. Mejia emphasized the need for collaborative efforts and strong, enthusiastic leadership from SA in order to accomplish the conference’s goals.

Auza believes the conference provided a launch pad for these efforts and he optimistically awaits what the future will bring.

“The most important goal was to create action in the areas we identified,” he said. “We created a space, laid a foundation, now it rests on all University stakeholders to take ownership of their University and make commitments.”

Story by Michael Helfenbein, work-study in the Office of News Services