Getting to Know: Assistant Provost for Equity and Inclusion Patricia L. Stith

When Patricia Stith traveled with her husband, Melvin, to their undergraduate alma mater at the end of March, she knew they were going to be honored as two among a group of major donors to Norfolk State University in Virginia. But she had no idea there was a further, surprise honor waiting for her as well. 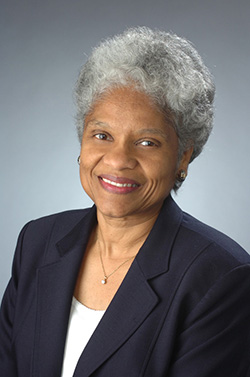 As part of the university’s 80th anniversary gala, her husband had made a significant donation so that she could be made the namesake of the Dr. Patricia Lynch Stith Success Center. The center will be used for tutoring and advising undergraduates at Norfolk State.

“I’m glad that they are spending the effort to make sure the students they bring in are retained,” she says. It is an issue that is dear to Stith’s heart. She has spent her career working to increase retention on college campuses.

As assistant provost for equity and inclusion and associate dean of the Graduate School here at Syracuse University, Stith works on retention of underrepresented minorities, “but really everybody,” she adds. She proudly points to portraits on her office walls of more than 70 graduate students with whom she has worked. Stith also serves as director of the Multicultural Graduate Orientation Program.

Stith began her retention work in 1969 at the Institute for Services to Education Summer Conference in Boston. From there, she became part of a federal college student retention program at Norfolk State. From 1972-76, she was a counselor/advisor in Syracuse University’s Educational Opportunity Center, where she advised disadvantaged adults on college admission, training programs and obtaining high school equivalency. She worked as an academic advisor at the University of South Florida (USF), then landed at Florida State University, where she eventually became director of retention studies.

Stith says increasing retention is often a matter of changing the institution itself. For example, at one point while working at USF, she discovered a need among some students for a basic math course. The university said it would not offer what it deemed a remedial course. Finding a place to take the course and traveling off campus to do so would have been too daunting for some students. So she arranged for an instructor from a community college to come to campus to teach the necessary course.

“I had to make sure those students didn’t fall through the cracks,” Stith says.

Patricia and Melvin Stith have been at Syracuse University since 2004, when he took the job as dean of the Whitman School of Management. He has since retired, but she is still at it, still working to keep students in school.

Back at Norfolk State, the Stiths support the Melvin and Patricia Stith Alumni House and the Obie and Mildred Lynch Endowed Scholarship. Here at Syracuse University, they have established a fund to aid graduate students.