Two tables full of repurposed books turned into artwork and items of creative expression are forming a celebration of National Library Week, as well as serving as a signpost of how changing times are affecting libraries, those in the library profession and the communities that libraries serve. 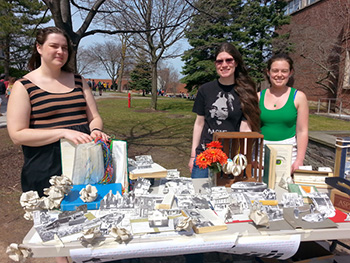 Alexandra Heidler, Emma Esperon and Margaret Craft, from left, with a portion of the “Upcycled Library” book repurposing display.

The “Upcycled Library” display is being hosted by LISSA, the Library and Information Science Student Assembly organization at the School of Information Studies (iSchool). The group’s goal was to host an event that would present “an opportunity to give old books new life.” Described as “part creative destruction, part book giveaway, part community building and part library advocacy,” LISSA’s idea was to distribute free, out-of-circulation books, recruit project participants, then ask them to create something new from the book materials, according to the organization’s Facebook page.

As both an exercise in repurposing materials and a statement about the possibilities of communities, the Upcycled Library project served to reinforce a belief “in the enduring future of print books and libraries” while signifying how “we also value a culture of innovation and creativity when it comes to re-imagining the future of our communities,” according to the Facebook page.

Participants were encouraged to make a book into anything “that might be functional, beautiful, provocative or anything else you dream up.” Consequently, the exhibit consists of widely varying and animated paper-based items crafted from books that have been weeded out of circulation from area libraries.

“We wanted to let students know that there are materials being weeded and recycled. But there are alternatives to just recycling the materials for their paper. You can make them into art,” says LIS graduate student Alexandra Heidler, one of the project organizers.

The effort has been a collaboration between library student members of LISSA, MLIS students at the iSchool, students at the School of Visual and Performing Arts and library workers at the University’s Bird Library.

As group members contemplated a project that would celebrate National Library Week, “trying to figure out how we could make it meaningful,” Heidler remembered how she used to pick up discarded book jackets at her home library to use in paper-craft projects. That led to the idea to collect books that had been weeded in the normal culling process to use as the raw materials for a creative, as well as informative, exhibit that went to the heart of library service.

Emma Esperon, MLIS student and a project leader, notes, “There’s a natural progression of books in a library, and to make room for new books, we weed out the old ones. We got local libraries to donate books that would either be recycled or would have been sent to Better World Books, then collected them and got to resurrect those books.”

Group members obtained a total of 16 boxes full of books and periodicals, donated for the project by Syracuse-area libraries, Heidler says. They then publicized the project, generated interest in the idea of creating an “upcycled” book exhibit, recruited recycling creators and scheduled yesterday’s exhibit day to involve students and others across campus, Esperon says.

Initially scheduled for the iSchool’s lobby, an unusually warm April day led them to take the display outside, where many students enjoying the weather on the Quad stopped by. The exhibit drew significant interest because it had the feel of a “pop-up art exhibit,” Heidler says. She notes that visitors were interested to learn about the project, and many were surprised to learn that it is National Library Week, so the display accomplished an educational goal, as well.

Several other students worked on the project in addition to Heidler, who works in circulation at Bird Library’s Access and Resources Department and is a graduate assistant at the Because Play Matters Game Lab at the iSchool; and Esperon, a photographic preservation intern at Bird Library’s Special Collections area. They are: Anna Chovanec, MLIS grad student and Special Collections Research Center Services Assistant at Bird Library; and MLIS students Margaret Craft, Kenneth Ronan and Carl Smith; and Indigo Halverson, a Transmedia major at the College of Visual and Performing Arts.

Bird library staff members who helped access the materials and assisted with production of the exhibit include: Patrick Williams, librarian for American Literature and other subject areas; Donna Sullivan, office supervisor in the Research and Scholarship Office; and Cathy Mulford, library technician in the Access and Resource Sharing area.

The display will remain on exhibit in Bird Library, at the Commons entrance near Waverly Avenue, through Friday, April 17.