The Spring Symposia series of the Syracuse University Humanities Center concludes with a two-day residency by Dominican author/musician Rita Indiana and Puerto Rican filmmaker Noelia Quintero. Much of their visit will focus on issues of contemporary Caribbean identity. 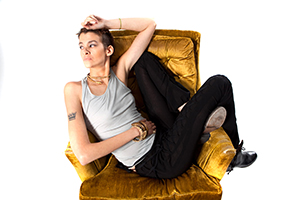 Titled “Writing, Performing, Producing Difference,” the residency begins Thursday, April 23, with a screening of Quintero’s “La motora roja tiene que aparecer” at 7 p.m. in Gifford Auditorium. Afterward, she will lead a discussion about the 2008 documentary, which examines the cultural importance of street art.

The following day, Quintero will join Indiana for an HC Mini-Seminar from 10 a.m. to noon in 304 Tolley Humanities Building. At 7 p.m, Indiana will read some of her selected works at La Casita Cultural Center (109 Otisco St., Syracuse).

All events are free and open to the public; however, the HC Mini-Seminar requires registration. To register, contact organizer Sydney Hutchinson, assistant professor of music history and cultures in the College of Arts and Sciences, at sjhutchi@syr.edu.

For more information, contact the Humanities Center at 315-443-7192 or humcenter@syr.edu.

“We’re honored to host this residency by Noelia Quintero and Rita Indiana, both of whom use the creative and performing arts to address issues of contemporary Caribbean identities, politics and gender,” says Gerald R. Greenberg, senior associate dean for the College of Arts and Sciences and interim director of the Humanities Center. “That their collaboration is both a personal and professional one is sure to evoke an insightful dialogue.”

In addition to being a filmmaker, Quintero is a digital media specialist, scriptwriter and producer. She has worked on various projects for television, radio and film throughout the United States, Latin America and Europe. 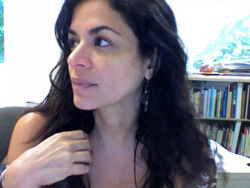 “La motora roja tiene que aparecer” (loosely translated as “The Red Motor Must Appear”) is typical of Quintero’s interest in the “needs and shifts” of contemporary culture. “The street is kind of a memory pool, where everyday experiences, art and communication take on a kind of primitive form,” she says. “Art manifested in urban spaces shows us where and how we live.”

Quintero’s partner, Indiana, is equally prolific. Famously tall and androgynous looking, she began her career as a novelist, but eventually switched to music, where her unique brand of “electro merengue” made her a cult heroine.

Indiana’s high-water mark as a singer and bandleader occurred in 2010 with “El Juidero,” which National Public Radio voted one of the year’s Top-10 Latin Alternative albums. A year later, the Spanish newspaper El País named her one of the world’s most influential Latino/a artists.

At the height of her fame, Indiana quit pop music and, save for an occasional film score, has returned to writing full time. Her novels include “La mucama de Omicunle” (Editorial Periferica, 2015); “Nombres y animals” (Editorial Periferica, 2014), which was nominated for the Casa de las Américas Prize, one of the oldest and most prestigious in Latin American literature; and “Papi” (Vertigo, 2005).

For all her success, Indiana eschews labels. “I’m uncomfortable with them because I’ve been dealing with labels all my life: tomboy, head-banger, weirdo or lesbian, underground, celebrity,” she said in a recent interview. “Labels are caricatures.”

Her and Quintero’s visit is co-sponsored by the departments of Art & Music Histories, English, Languages, Literatures, and Linguistics, and Women’s & Gender Studies, as well as the programs of Latino-Latin American Studies and LGBT Studies, all in the College of Arts and Sciences; and the Department of Communication and Rhetorical Studies in the College of Visual and Performing Arts.