A team of 21 students from Syracuse University recently took top honors at the National Model United Nations (NMUN) Conference in New York City, where they were named an “Outstanding Delegation.” 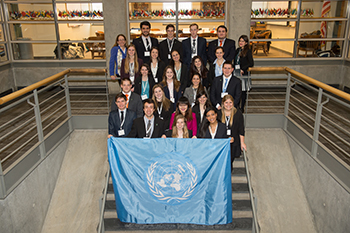 Syracuse’s delegates joined more than 5,000 others from high schools, colleges and universities around the globe for a week of events and activities designed to shed light on the inner workings of the United Nations.

Representing the Republic of Ecuador, the University’s MUN delegation took part in activities at the newly renovated UN General Assembly Hall and at neighboring hotels. The delegation was made up of 23 international relations majors (two of whom were alternates) from the Maxwell School of Citizenship and Public Affairs and the College of Arts and Sciences.

The theme of the conference was “Impact.”

“We’re extremely proud of our students, who represent the next generation of global citizens committed to fighting poverty, human rights abuses and devastating conflicts,” says Mary Lovely, professor of economics and chair of the international relations program (IRP) in the Maxwell School. “All of them proved their mettle with how they exercised their public speaking skills, debated international affairs and, most importantly, listened to and forged compromises with their peers.”

Sponsored by the National Collegiate Conference Association, NMUN encompassed 21 committees, as well as two security councils. Delegates worked feverishly to propose resolutions that addressed a myriad of topics paralleling those in the real world. The program also contained keynote addresses by Jan Eliasson, deputy secretary general of the UN, and Luis Moreno-Ocampo, the first prosecutor of the International Criminal Court.

Francine J. D’Amico, associate professor of international relations in the Maxwell School, is the delegation’s faculty advisor and chief instructor.

“That our students usually fare well at NMUN is a reflection of their Syracuse training,” adds D’Amico, who also is IRP’s undergraduate studies director. “The conference is an effective tool for teaching students about the dynamics of multilateral diplomacy and international relations. It’s an extension of the classroom.”

NMUN has three award categories, of which “Outstanding Delegation” is the equivalent of first place. “This was really an accomplishment for our students because only 10 percent of the teams were named ‘Outstanding Delegations,'” she says. “The keys to success are careful academic preparation, practice at public speaking and building team camaraderie.”

The University’s MUN delegation has received many “outstanding” awards throughout its career, including one last fall in Washington, D.C., where it represented the Republic of Chile, and another last spring in New York City, representing the Tunisian Republic.

In preparation for this year’s spring conference, D’Amico’s students met twice a week, for two months, to study the history, culture, politics and foreign policy of Ecuador; UN history, structure and operation; international negotiation and UN politics; and resolution writing and negotiation simulation.

Now that the conference is over, delegates can look forward to several weeks of debriefing and laying the groundwork for the next spate of events, where Syracuse is representing countries in the Asia-Pacific region.

Syracuse’s participation in NMUN is made possible by support from the dean’s offices of the Maxwell School and the College of Arts and Sciences; the iLEARN program in Arts and Sciences; and the estate of Robert J. Mowitz ’41, G’48, in conjunction with his sister, Evelyn ’31.