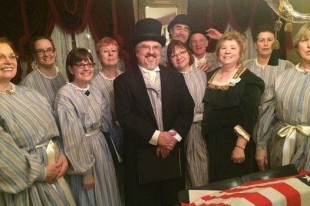 Members of the Syracuse Chorale portray the Hutchinson Family Singers at a January event at the Matilda Joslyn Gage Center in Fayetteville. The ensemble will perform at the April 19 concert at Hendricks Chapel.

The Syracuse Chorale presents “A Lincoln Legacy” Sunday, April 19, at 4 p.m. at Hendricks Chapel. The concert marks the 150th anniversary of Abraham Lincoln’s assassination and Central New York’s role in the abolition and suffrage movements during the Civil War era.

Advance tickets are $12. Tickets at the door are $15; children under 12 admitted free. Parking is available in the Q1 lot and other open lots on campus.

The concert will include performances of the “Lincoln Funeral March” by William Wolsieffer; “Lincoln and Liberty” by William Burleigh, “Dirge for Two Veterans,” by Ralph Vaughn Williams with words by Walt Whitman; and two arrangements of “Battle Hymn of the Republic. The chorale is directed by Warren Ottey and accompanied by Bill Verity.

Members of the Syracuse Chorale will wear period dress, and an ensemble will portray the Hutchinson Family Singers, a popular 19th-century group that sang about abolition and suffrage. Syracuse media personality George Kilpatrick will narrate the event, which will include a script with numerous mentions of local places, events and people. Audience members are encouraged to wear period dress.

Members of the U.S. 12th Regiment, Company A, Civil War re-enactors, will set up an encampment near Hendricks Chapel, and several re-enactors will participate in the performance. A collection of Lincoln memorabilia will be on display at Hendricks.

The concert is the culmination of the chorale’s 2014-2015 theme, focusing on Abraham Lincoln’s connection to Central New York. Lincoln died April 15, 1865, a day after John Wilkes Booth shot him. Lincoln’s funeral train stopped briefly in Syracuse on April 26, 1865.

This project is made possible with funds from the Decentralization Program, a regrant program of the New York State Council on the Arts with the support of Gov. Andrew Cuomo and the New York State Legislature and administered by CNY Arts.

Syracuse Chorale was formed in 1953, and the choir rehearses Tuesday nights at First United Church of East Syracuse. For more information, see www.syracusechorale.org.