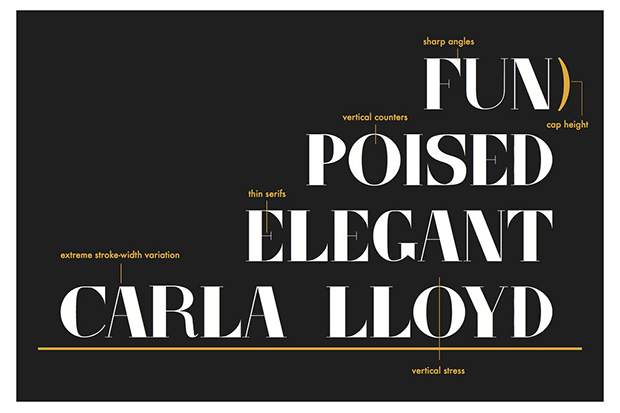 The display cases in the lobby of Newhouse 1 currently contain work like nothing you’ve ever seen. The exhibit is a series of newly created typefaces inspired by the pillars of the Newhouse School: professors.

Students in GRA 437, “Typographic Design,” created each typeface based on the personality and teaching style of a Newhouse professor whom the student chose as a “muse.”

Adjunct professor Claudia Strong started teaching the class last year and decided it was important for students to design their own typefaces from scratch, so she developed the project.

“I wanted them to understand what it took to get us where we are typographically in this day and age,” Strong says. “I wanted them to remember and appreciate all the type designers who devoted lives and decades to creating letter forms so that we can better communicate and connect with one another.”

The students have been working on the project all semester. After selecting their muse, each student interviewed the professor and sat in on his or her class. Strong asked the students for adjectives for the professor that would then manifest in a typeface. Each student sketched the typeface first and then designed it on the computer in the fourth week of class. The students are still developing the digital typefaces.

Before putting the typefaces onto the computer, the class heard from guest speaker Tyler Finck, a graphic designer who created the open source font Ostrich Sans.

Strong says the project was a long, intensive process for the students, but the majority were pleased with the result, especially after seeing the exhibit go up. The professors, she added, have been thrilled with the typeface creation since the start.

“It looks pretty close to what I probably would’ve done if I was doing it on my own, though I don’t have the typeface chops to pull that off,” says assistant magazine professor Corey Takahashi of his typeface.

As part of the final project, students will provide the professor with the usable typeface.  Associate professor Tula Goenka also inspired a typeface. She says she may use the typeface to help promote the screening event for one of her capstone classes. Professor Lawrence Mason also says he hopes to use his typeface.

“For now, I’ll be really happy to use the typeface that (the student) designed for me,” Mason says. “I think its just great. How many people have that?”

In light of the positive reaction to the exhibit, Strong says she hopes to continue it in the future.

“It was a great opportunity to build community, and it highlighted for me one of the great things about Newhouse, which is that we are a big family. We have opportunities like this to socialize and encourage one another and support one another,” Strong says. “And I was happy to add to that list.”

Story by Claire Moran, a sophomore broadcast and digital journalism major at the Newhouse School.