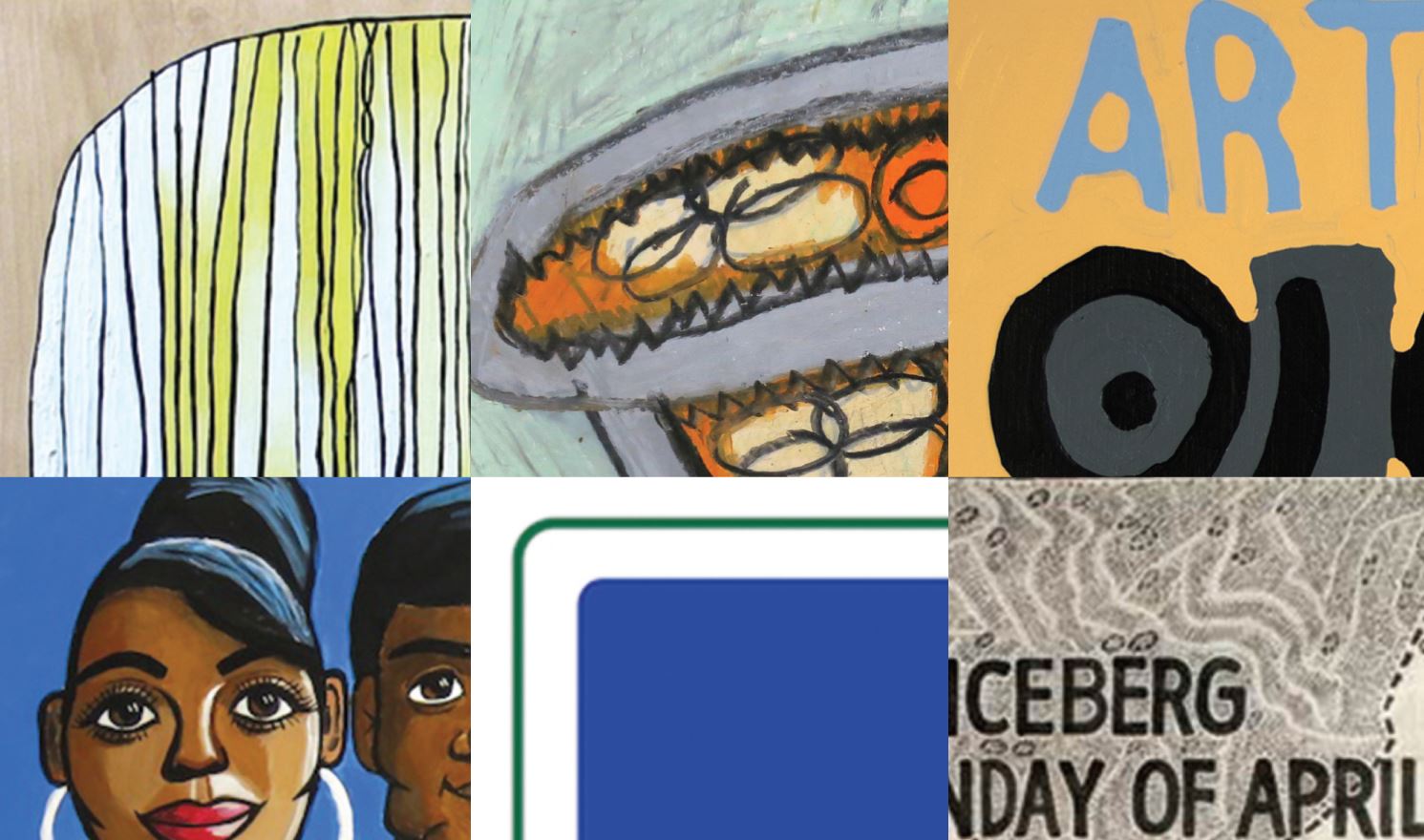 This image represents some of the artwork on display as part of the Wynn Newhouse Awards Exhibition.

The ninth annual Wynn Newhouse Awards Exhibition will open on April 14 at the Palitz Gallery located in Syracuse University’s Lubin House at 11 East 61st St. in New York City. This is the fifth year that Palitz Gallery has hosted the exhibition that was created to draw attention to the achievements of artists of excellence who have disabilities.

Each of the award winners receives a portion of a $60,000 per year allotment from the Samuel I. Newhouse Foundation and this year 15 works, including watercolor, works on paper, acrylic on canvas and mixed media, will be on display. The grant winners include Kerry Damianakes, Carol Es, Park McArthur, Marlon Mullen, William Scott and George Widener.

“The Samuel I. Newhouse Foundation has given out these awards since 2006,” says Bill Butler, Newhouse consultant. “In those nine years the level of talent has been consistently excellent. We are proud to reward a few of the many talented artists in this community. We hope these awards and the Palitz Gallery exhibition will expose the public to the many new creative ideas offered by artists with disabilities.”

This year also marks the first time that several winners were selected from art centers that work exclusively with artists with disabilities. Marlon Mullen is an artist at the NIAD art Center (National Institute of Art & Disabilities), founded in 1982 NIAD’s visual art program promotes meaningful independent living by artists with disabilities—while its artists create remarkable contemporary art. In a unique open studio environment, and with the guidance of qualified staff, NIAD artists acquire new skills in artistic practice and in independent living. As artists paint, build sculpture, mold clay, or work with textiles, their skills of observation and project management improve.

Kerry Damianakes and William Scott are represented by the Creative Growth Arts Center, which is located in Oakland, Calif., and serves adult artists with developmental, mental and physical disabilities, providing a professional studio environment for artistic development, gallery exhibition and representation and a social atmosphere among peers. The Brooklyn Museum recently had a major exhibition of works by another Creative Growth artist, the late Judith Scott.

Nominees and winners of the Wynn Newhouse Awards are chosen by a committee, composed of persons respected in the arts and disabilities communities, who review all submissions. This group also decides how the grant money will be dispersed among the artists. The Selection Committee for this year’s awards was composed Gavin Brown of Gavin Brown’s Enterprise; Domenic Iacono, director, SUArt Galleries; Mia Locks, curator, MOMA PS1; Nancy Rosen, art consultant; and Rusty Shackleford, artist and one of last year’s winners.

Kerry Damianakes has a powerful manipulation of her materials that consumes the page with a frenetic vigor. Working in a bold and colorful style, she recreates images of her favorite foods in a particular blend of recipe-based Pop “serial-ity.” With a love of clean and simple form bounded by strong, black line work, every composition is always accompanied by a caption-like border that details each meal or nature-based study with an almost scientific exactness—a matter-of-fact timestamp that chronicles the banal with an otherwise energetic, uniquely activated script.

Damianakes’ work has been widely exhibited both at Creative Growth and in outside shows including those at the California Culinary Academy in San Francisco, Rena Bransten Gallery, San Francisco, the Oakland International Airport and the Gyeonggi Museum of Modern Art in Korea

Carol Es is a self-taught visionary artist, write, and musician who was born and raised in Los Angeles County. Her art is fueled by childhood, personal narratives, Judaism and creating a spiritual resolve. Through an amalgamation of oil paint, paper garment patterns, and embroidery thread, candid experiences are laid bare and forged directly into the wor—interweaving a mysterious and primitive, yet childlike flavor.

Park McArthur examines the phenomenon of conceptual art from the perspective of dependency. Her work, which spans sculpture, video and performance, engages the history of institutional critique, while at the same time, asks what institutions other than art are in need of critique.

McArthur’s art has been presented at Essex Street, New York; The Kitchen, New York; Galerie Lars Friedrich, Berlin; Laurel Gitlen, New York; Sculpture Center, New York; ICA Philadelphia; and Botkyrka Konsthall, Sweden. She recently had a solo exhibition at Catherine Bastide in Brussels and will have one upcoming with Lars Friedrich in Berlin.

Marlon Mullen bases his paintings on found photographic image—mostly from lifestyle, news and contemporary art periodicals—which the artist uses as a departure point for his subsequent work.

In the process of developing a painting Mullen’s original magazine pages usually become obscured, or literally abstracted, where an image is subsequently reduced to a graphic schema of interlocking colors and forms. Very similar to the beats created for hip hop, operating at the threshold between legibility and illegibility Mullen’s works lives within the multiple histories of 20th century modernism, while remaining highly personal. Mullin’s work has been exhibited in several galleries in New York and in California.

A self-taught artist, William Scott has become the architect and subject of his utopian universe, re-building his native San Francisco in search of the elusive “normal life,” William uses his work as a transformative tool to alter the often harsh reality of urban crime, disability and family turmoil into a world of peace, safety and good mental health.

Often employing the phrase “Reinvent the Past,” Scott is nostalgic for a golden era of culture, music and moral values, which he hopes to return to through his artwork. Scott’s vision of “wholesome encounters” is both a serial fixation that is prone to repetition, but also capable of such surreal, sincere yearning that his prophetic imagery actually amounts to a complete—albeit fantastical—urban world. With such committed enthusiasm and a highly developed painting and drawing style, Scott questions the hard edge that contemporary city life often creates, and offers us a convincing glimpse of an alternative future.

A self-taught artist and a calendar savant, George Widener creates mixed-media works on paper that give aesthetic, visible form to complex calculations based on dates and historical events–the sinking of the Titanic is one of his favorites. The artist often uses found paper, or a support composed of layers of tea-stained paper napkins. His drawings feature simple palettes, sophisticated patterning, and bold compositions of dates and imagery that transcend centuries of time and the history of art. Widener sometimes likens himself to a “time traveler.”

As the artist states,“[In my art] I am using the dates as the medium. I wondered if I could create a pattern of [dates of] disasters or of weather, and start predicting. Hypothetically, if everything adds up but there is one [date] missing and a future date fits in, does that mean there will be storms? That fascinated me.” Widener has exhibited in galleries in New York, Europe and Asia.

Wynn Newhouse was a prominent and avid art collector who lost functional use of one hand in an industrial accident as a young man. By midlife he was diagnosed with multiple sclerosis. Wynn envisioned the Wynn Newhouse Awards in 2005.  The program provides grants to talented fine artists with disabilities as defined by the Americans with Disabilities Act. Wynn was joined by top artists, curators and critics who shared his belief that many disabled people have unique insights and skills that can enhance their ability to create exciting art. He hoped that these exhibitions would enable the arts public to see the many creative ideas contained in their works. Wynn passed away in 2010.