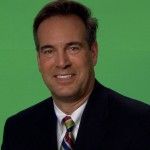 Brian Crowell ’89 from VPA is among the group of Syracuse alum providing coverage of the Masters golf tournament.

When one of the world’s most prestigious golf tournaments, one which is steeped in rich history and tradition, was in need of announcers, it turned to the talents of people who honed their craft at an institution with a rich broadcast history and tradition of its own: Syracuse University.

Four announcers who attended Syracuse will be handling broadcast duties for the event. Carter Blackburn ’01, Andrew Catalon ’01, Brian Crowell ’89, and Mike Tirico ’88 will provide expert analysis and insight throughout the event for CBS, The Golf Channel and ESPN. Crowell is an alumnus of the College of Visual and Performing Arts, while Newhouse lays claims to Blackburn, Catalon, and Tirico.

Of course, none of this should come as a surprise. The Newhouse School has produced a long list of well-known broadcasters covering all the major events. Professor of Practice John Nicholson, director of the Newhouse Sports Media Center, points out that the NCAA basketball tournament featured a large group of Syracuse University alumni, including Ian Eagle ’90 (CBS) and Pete Thamel ’99 (Sports Illustrated).

“That’s why the Sports Media Center exists,” says Nicholson, who adds “we have hundreds of people not only working on camera and behind the mic, but in the live truck, doing graphics, promotion, management and more at virtually every sport’s broadcast network. They come to Newhouse because of all the people before them.”

They come back to Syracuse University too. Professor Nicholson, who has taught a number of the more recent broadcasters and written about some of the well-known names of the past, says a number of Oange alumni have recently returned to speak to students, including Crowell, Eagle and Tirico. According to Nicholson, “It’s because of their love for Syracuse University that they return.” 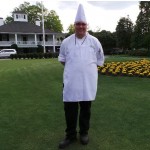 Along with Newhouse and VPA, a student with connections to Falk College and the Whitman School of Management is also at the Masters, but for an entirely different reason. Cody Dedischew is a learning assistant in the Falk College food studies program, and an MBA student in Whitman. Dedischew spent the weekend as the suite Chef for the UPS and Rolex suites, responsible for preparing meals for sponsors who paid $50 million apiece for a suite at the Masters. Dedischew first started working in Augusta during his senior year at Johnson and Wales University, and has been back each year to offer his skills. Says Dedischew, “I truly love my work at the Masters, it is a great experience to work alongside the very best in the industry, and learn from masters of their respective trades.”