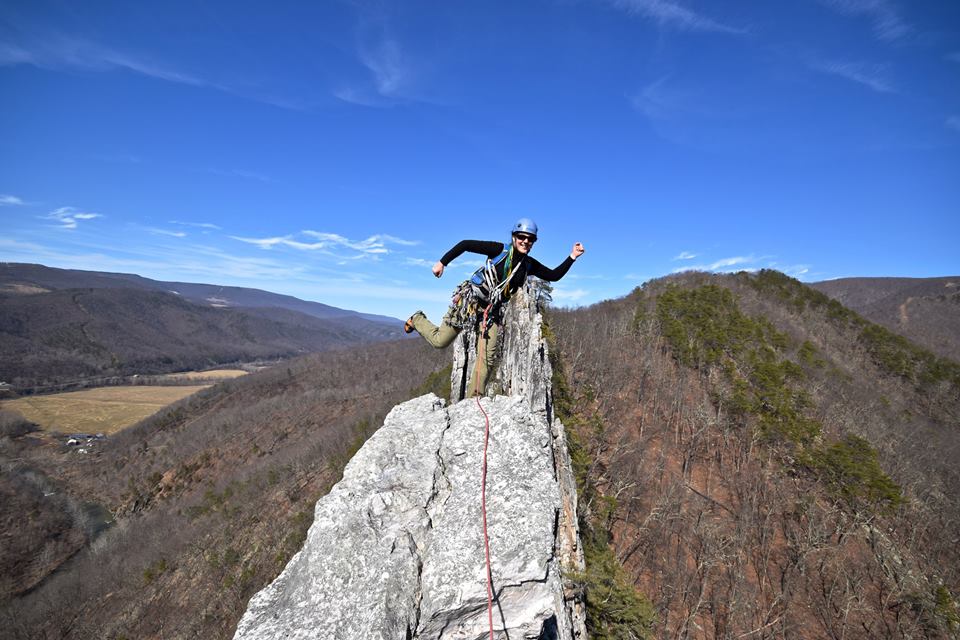 Looking down into the gaping, dark hole of a cave you’re about to rappel into may not be everyone’s idea of fun. But members of the Syracuse University Outing Club (SUOC) say you never know until you try.

Ana Ally and Malcolm Moncheur, SUOC president and vice president, respectively, weren’t so sure themselves when they first began with the club as freshmen. Now both say being part of the club that teaches skills for outdoor sporting adventures—such as caving, hiking, rock climbing, whitewater kayaking and snow shoeing—has been a life-changing experience.

“I used to run a backpacking experience at a summer camp but I had never tried anything else—caving, kayaking, rock climbing,” says Ally ’15, a mechanical engineering student in the College of Engineering and Computer Science.

After joining SUOC her freshman year, Ally soon became a backpacking leader—a member who trains and meets the skills necessary to lead other members in that activity—and then worked on getting her caving leadership. She also pursued rock climbing, which has developed into a passion.

“SUOC changed my whole perspective on life. It changed what my interests are and what I want to do,” says Ally, who is a leader in horizontal caving, cross country skiing and winter backpacking. “I’m really interested in alpine climbing and mountaineering, and that would never had happened if I hadn’t joined SUOC.”

After graduating this May, Ally plans to go to graduate school, but will be taking a year off to explore more of the world through rock climbing with friends, starting in the Wind River Range in Wyoming. 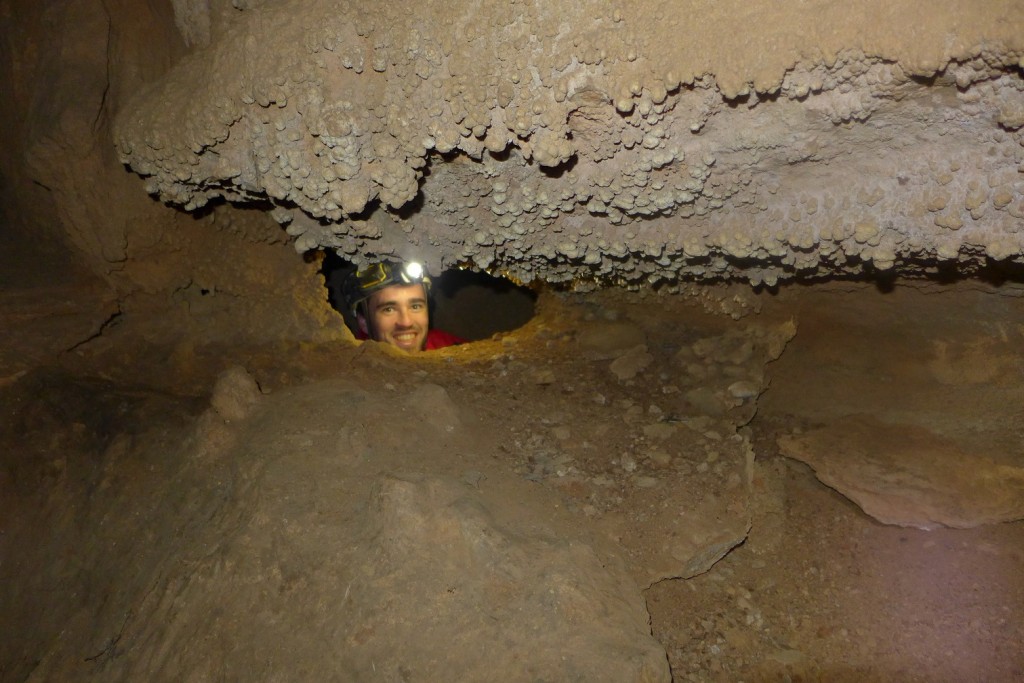 A member of the Syracuse University Outing Club explores a cave during the club’s spring break yearly excursion in West Virginia.

“I love engineering and I want to go to graduate school, but there are now so many personal interests I want to pursue,” Ally says. “That’s what this year is going to be dedicated to and getting growth in those areas.”

Moncheur says joining SUOC was the best decision he made in his college career.

“I didn’t have any experience in the outdoors,” Moncheur says. “After I joined the club, I had all these experiences and I had so much personal growth. It’s changed my perspective on my life in a good way.”

Moncheur will be spending time after graduation competing in an Ironman triathlon, then joining Ally for rock climbing excursions and possibly later undertaking a bike tour—experiences he never could have imagined himself doing when he first arrived on campus.

SUOC, which has about 160 members, is for people who are at any skill stage—beginners through advanced. Between 6 to 10 trips are scheduled every weekend during the semester, with jaunts to such places as Morgan Hills State Forest in Cortland County or the Adirondacks. All equipment is provided by the Outing Club.

Students interested in becoming leaders go through a process of leadership training, which includes learning the skills of the activity, being certified in CPR and first aid, and running a trip from start to finish under the supervision of a leader.

Moncheur, a senior bioprocess engineering student at the SUNY College of Environmental Science and Forestry, is a leader in horizontal and vertical caving and cross country skiing. He enjoys the challenge of the various sports and helping those new to the experience.

“You go to the entrance of this cave with this huge, dark gaping hole and you have to figure out how to get down there. There’s a lot of technical skill involved and I like the responsibility making sure I’ve done it right,” Moncheur says. “No one wants to rappel down into this deep gaping hole, but it’s about making people feel comfortable, and that it’s a very safe experience.”

One of their club’s highlights every year is the annual spring break excursion to Thorn Spring Park in Franklin, W. Va.

For only $160, students find a tranquil spot that offers the range of outdoor sports, shared community experiences and a break from school work.

SUOC has been making the annual trip for at least 30 years, renting out cabins and staking tents nearby. This year about 90 students made the trip. 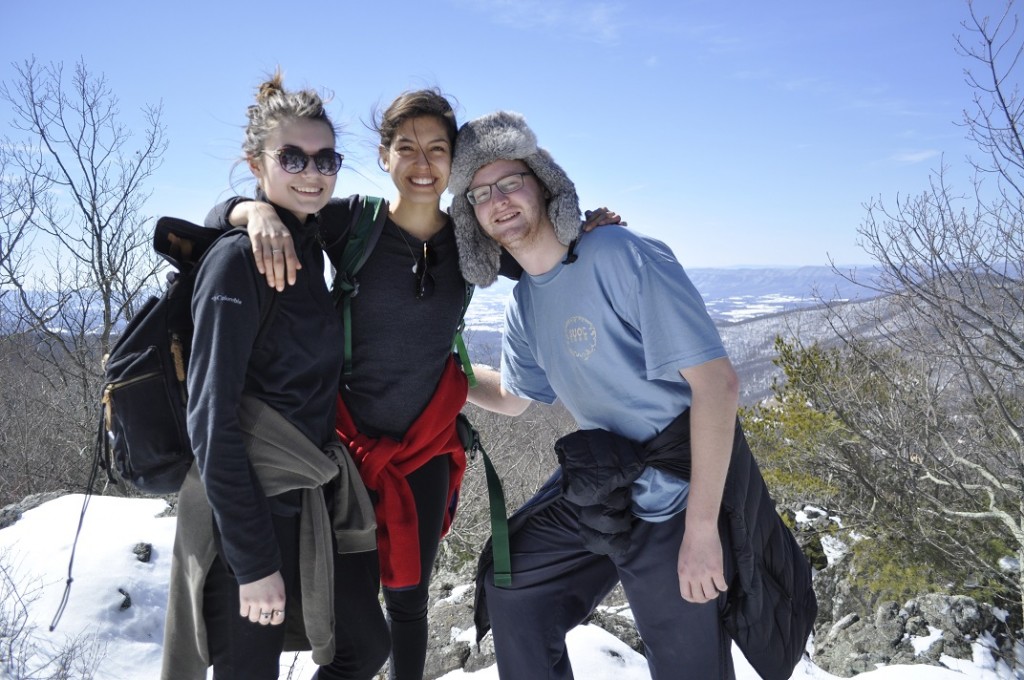 “Right up the road is a small cave that we go to, and a nearby cliff has rock climbing,” Ally says. The site has both horizontal caving—primarily through use of crawling or walking—and vertical caving—through the use of rappelling equipment.

“Spring break was a non-stop adventure. It was awesome seeing everyone in their element, from cavers to climbers,” says club member Anna Delapaz ’17, a food studies and nutrition major in the Falk College of Sport and Human Dynamics. “Everyone feels so comfortable around one another. Over the course of the week it’s amazing how close you can grow to people you just met.”

It’s also a great time for beginners to join in SUOC’s adventures.

“For a lot of people, spring break is their first experience with SUOC and then a lot of them are just hooked afterward,” Moncheur says.

Those interested in finding out more can visit the Syracuse University Outing Club website here or attend their weekly meetings on Tuesdays at 7:30 p.m. in the Heroy Geology Building Auditorium. Students can hear about the upcoming trips and sign up. The first trip is free and then membership is $15 for undergraduates and $20 for graduates for the year.

In many ways, Delapaz says SUOC is like a big family.

“SUOC offers members amazing opportunities to learn specialized skills, enjoy nature and make lifelong friends,” says Delapaz, who is becoming a backpacking leader. “There is a wide range of experience and knowledge within the club—and everyone is so friendly and eager to share their passion with new and existing members.” 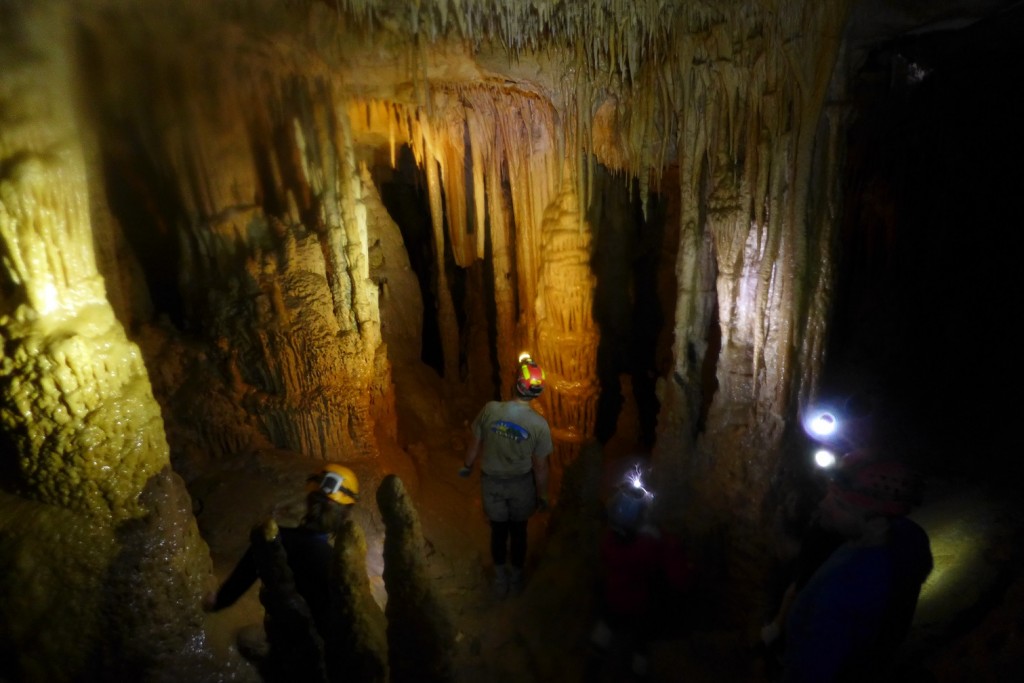 Outing Club members make their way through a cave during their spring break trip.