Matt Fernandes may be from California, the movie-making capital of the world, but the aspiring filmmaker has no regrets about attending college on the opposite side of the country. If pressed for an answer, the San Jose native would probably give his experience at Syracuse University, as a dual major in English in the College of Arts and Sciences and in television, radio, and film in the S.I. Newhouse School of Public Communications “two thumbs up.” 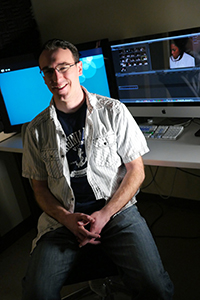 Q: Why did you decide to come across the country to study at Syracuse?

A: I had a comfort zone in California that I felt I needed to break with. I wanted a well-rounded education, where I could explore my interests and grow as a person. Syracuse seemed to offer that more than any other university.

Q: In addition to your two majors, what else have you gotten involved in at Syracuse?

A: I’m part of the the Renée Crown University Honors Program. I was the marketing director of OrangeSeeds, a first-year leadership empowerment program, for two years; and an acting coach for the First-Year Players, a musical theater organization for non-drama majors. I also have volunteered at the Salvation Army, American Red Cross and the Rescue Mission.

Q: How did you decide filmmaking was in your future?

A: I got bit by the acting bug fairly early. During high school, I spent many an afternoon writing and directing short plays, as well as shooting promos for upcoming productions. It was through my role as the fundraising chair of my school’s drama department that I became interested in film.

Since then, I’ve thrown myself into writing and directing. I’m really proud of my Honors Capstone Project, which is a documentary about former slaves who became authors, abolitionists and social reformers. It’s a docudrama called American Voices.

Q: What was involved in putting your capstone project together?

A: I interviewed scholars all over the country, including at Harvard University and the University of North Carolina at Chapel Hill. Many of these meetings involved professors of African American studies and American literature. The whole experience of filming and traveling was funded by the Honors Program and Newhouse’s TRF Program.

Q: What else are you proud of having done during your time here?

A: I’m proud of the work I’ve done in the English language program as a ‘conversation partner,’ tutoring international students in conversational English. Being a ‘conversation partner’ has taught me how to be a better listener and to be more culturally aware. I now hope I can earn to a Fulbright grant award, to spend a year teaching English in Malaysia. It will help me when I come back [to the United States] and enter the entertainment industry.