Shawn Weismiller, a graduate student in the multimedia photography and design department in the Newhouse School, is one of 19 students who has been chosen to participate in the 2015 Carnegie-Knight News21 national multimedia investigative reporting initiative. The students, who hail from top U.S. journalism and communications schools, will lead an investigation into the issues surrounding the legalization of marijuana. 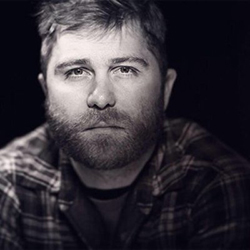 Originally from Old Lyme, Conn., Weismiller served for 12 years in the United States Air Force as a combat photojournalist. While enlisted, he was selected to participate in Newhouse’s military visual journalism program. He left active duty in 2010 and is currently a graduate photography student at the Newhouse School.

Headquartered at the Walter Cronkite School of Journalism and Mass Communication at Arizona State University, News21 was established by the Carnegie Corp. of New York and the John S. and James L. Knight Foundation to demonstrate that top journalism students can produce in-depth reporting and multimedia innovations.

Students participating in the 2015 project are spending the spring semester researching and reporting on marijuana issues as part of a seminar taught in person and via video conference by Leonard Downie Jr., former executive editor of the Washington Post and Cronkite’s Weil Family Professor of Journalism.

“We chose the legalization of marijuana this year because it is a historic change, debated in election referenda and legislatures in states across the country,” Downie saya. “And News21, with student journalists at universities throughout the nation, is uniquely able to dig into all the issues that legalization poses.”

Following the seminar, students move on to paid summer fellowships during which they work out of a newsroom at the Cronkite School and travel across the country to report and produce their stories. The fellows work under the direction of News21 Executive Editor Jacquee Petchel, a Pulitzer Prize-winning journalist and former senior editor for investigations and enterprise at the Houston Chronicle.

“Not only will we be investigating the scope of the marijuana legalization movement and its many political and practical intricacies, we also will be presenting this project with original data and multimedia elements conceived and designed by the fellows in ways that push and promote enterprising storytelling on a national level,” Petchel says.