On April 17-18, the Moral Injury Project will hold a two-day conference titled “What Did You Fight For, What Did You Bring Home: Moral Injury in the Lives of Military Veterans” in 500 Hall of Languages. The event is free and open to the public, but registration is required. 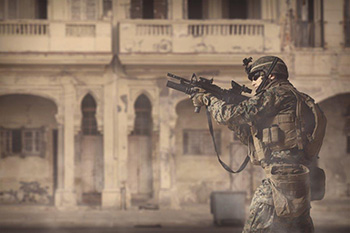 The Moral Injury Project will hold a two-day conference on April 17 and 18.

This conference will bring local, regional and national scholars, clinical practitioners, writers and artists to address the psychological, spiritual and artistic dimensions of moral injury among veterans. Moral injury is the damage done to one’s conscience or moral compass when one perpetrates, witnesses or fails to prevent acts that transgress one’s own moral and ethical values/codes of conduct/understanding.

In addition to specific panels, the conference will include an art exhibit by veterans at 914Works Gallery, 914 E. Genesee St., and a literary reading at the Goldstein Alumni Center by members of the Syracuse Veterans’ Writing Group as well as guest writers Shannon Meehan and Roger Thompson, authors of the Iraq war memoir “Beyond Duty,” and Iraq war veteran, U.S. Army medic and poet Jenny Pacanowski.

“Now more than ever, it is important to understand and respond to the issue of moral injury among veterans. We are excited to further the national conversation on moral injury by bringing together diverse scholars and practitioners engaged in cutting-edge research in three distinct fields,” says Tiffany Steinwert, dean of Hendricks Chapel and convener of the Moral Injury Project committee. “This conference offers us a unique opportunity to explore the intersections of psychology, spirituality and the arts as we learn more about moral injury.”

“Moral injury is receiving attention from the VA, publications like The New York Times, The Atlantic and Huffington Post,” says Andrew Miller, U.S. Army OEF veteran and coordinator of the Moral Injury Project. “We are recognizing another missing piece in the bridge that gets veterans home, psychologically, mentally and spiritually. This conference is an incredible collection of very intelligent people pioneering the research aspects, the mentoring, witnessing and narrative aspects of this process.”

The conference is co-sponsored by the SU Veterans Resource Center, the Institute for Veterans and Military Families, the Office of the Vice Chancellor of Veterans and Military Affairs, the psychology department, the David B. Falk College of Sport and Human Dynamics, the Newhouse School for Public Communications, University College, 914Works, Hendricks Chapel and Chaplaincies, the Student Veterans Association, the Department of Women’s and Gender Studies, the Department of English and the Writing Program. Le Moyne College’s Departments of History, Psychology, Peace and Global Studies, the Jesuit Community and the McDevitt Center are also co-sponsors.

Free parking will be available in Quad 1 and adjacent lots on the SU campus.