Urban Video Project (UVP) and parent organization Light Work will present the world premiere of “Crow Requiem,” a new video work by artist and filmmaker Cauleen Smith, from April 7-May 30. The exhibition will take place at UVP’s Everson venue, a year-round outdoor projection onto the north facade of the Everson Museum of Art in downtown Syracuse. The projection will run every Thursday through Saturday from dusk until 11 p.m. 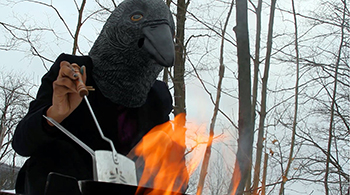 A still from “Crow Requiem”

The artist will discuss her practice at two related events on April 7. Smith will deliver a formal artist talk from 2-4 p.m. in Shemin Auditorium on the Syracuse University campus. She will also present her work as part of “Speculations: Science Fiction, Chronopolitics and Social Change”—a panel talk, performance and reception—beginning at 6:30 p.m. in Hosmer Auditorium at the Everson Museum. A reception and special Tuesday night screening will follow on the plaza. A related workshop, “DIY Time Travel in the Afrofuture” with Rasheedah Phillips, creative director of “The AfroFuturist Affair” and founding member of Metropolarity Speculative Fiction Collective, will take place from 11 a.m.-12:30 p.m. on April 7 at Light Work Lab, 316 Waverly Ave.

All events are free and open to the public.

Crows are well known for their mythological reputation as tricksters and harbingers of death, but less for the reality that they are creatures of remarkable intelligence who lead complex social lives. Smith became fascinated by these misunderstood creatures when she noticed the massive flock of crows roosting outside her bedroom window during her artist residency at Light Work. She learned that the native population of crows circulates between Syracuse and nearby Auburn, and that this migration is partly in response to harassment and, at times, state-sanctioned violence at the hands of a human population that views them as a nuisance. Smith interweaves the figure of the crow through the histories of these two cities, both of which were key stations on the Underground Railroad and innovators in early cinematic and 3D optical technologies. “Crow Requiem” connects this history to recent and ongoing violence against people of color at the hands of the state. The video was shot on location in Central New York and features selections from the Onondaga Historical Association’s extensive archive of 19th century stereoscopic images.

Smith’s films, objects and installations have been featured in group exhibitions at the Studio Museum of Harlem; Houston Contemporary Art Museum; the Blanton Museum of Art, Austin, Texas; San Diego Museum of Contemporary Art; Yerba Buena Center for Arts, Calif; D21 Leipzig, Germany; and the New Museum, N.Y. She has had solo shows at The Kitchen in New York City, MCA Chicago and Threewalls in Chicago; and Women & Their Work in Austin, Texas. Her film work has been featured in such high-profile festivals as Sundance and screened twice by demand at the prestigious Robert Flaherty Film Seminar Exhibition. In 1999, she was selected as one of Ten Directors to Watch by “Variety” magazine. Smith is the recipient of several grants and awards, including a Creative Capital grant, the Rockefeller Media Arts Award, Chicago 3Arts Grant and the Foundation for Contemporary Arts. Smith earned an M.F.A. from the University of California, Los Angeles. She currently lives in Chicago while teaching at the Vermont College of Fine Art low-residency M.F.A. program. More information: http://www.cauleensmith.com