The lineup for this year’s Mayfest, to be held April 24 in Walnut Park, will feature electro-pop duo The Knocks as headliners, with rapper Skizzy Mars as direct support, and pop artist VÉRITÉ as the opener. The event will take place from 1-6 p.m. 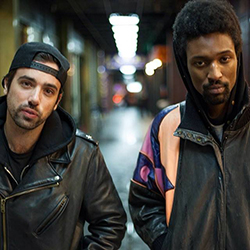 Declared by music magazine NME as one of the “20 hottest producers in music” and “cred-pop’s answer to the Neptunes” by the Guardian, The Knocks are one of the most buzzed-about duos on the electronic circuit. Initially gaining recognition for their remixes for artists including Haim, Santigold, Foster the People, Two Door Cinema, Ellie Goulding, Chiddy Bang,Passion Pit and The 1975, they eventually found themselves experimenting with sounds of their own. Over the past three years, the duo has been jet-setting around the globe for DJ gigs, sharing stages with Grouplove, M.I.A., Two Door Cinema Club, Dragonette, Sleigh Bells, Chromeo and chrome, all while releasing infectious singles that have turned The Knocks into blog darlings. With several of their songs reaching #1 on HypeMachine and over 6 million plays on Soundcloud, The Knocks have not only just released their latest single, “Dancing with Myself,” but have a new EP entitled “So Classic,” set to be released on April 7.

Born and raised in Harlem, New York, Skizzy Mars’s love for music began through rappers like Kid Cudi and Kanye West. By the time he was a teenager, he released a single entitled “Douchebag,” which garnered industry attention and ultimately landed him a publishing deal. He went on to release two mixtapes, “Phases” (2013) and “Pace” (2014). His most recent project, a seven-track EP titled “The Red Balloon Project,” was released in February and debuted at number 35 on the Billboard 200 chart.

VÉRITÉ made a grand arrival in the alt-pop world with her debut single “Strange Enough,” a track that instantly became the #1 most viral on Twitter and crowned her as the #1 artist on Hype Machine. The Line of Best Fit calls her a “rising pop star ready to make her mark,” and Neon Gold says she is “steps towards pop royalty.” With praise from countless other outlets like Buzzfeed,NYLON, Indie Shuffle, Arjan Writes, Pigeons and Planes and Refinery 29, her songwriting blends vulnerable, honest lyrics with huge pop hooks. Her most recent single, “Wasteland,” is out now.

Students and guests wishing to enjoy the festival’s beer tent MUST have a valid ticket, college or military ID, and state or government issued ID over 21 to receive a bracelet for beer and admission to beer section on Walnut Park. Entry between 1-3 p.m. will receive wristbands for three beers and entry after 3 p.m. will receive wristbands for two beers. Please note that backpacks and/or bags will not be permitted.

Please be advised that all students and guests must have a valid college or military ID to be granted entry to the park. A state-issued ID will NOT suffice.