One of the finest acoustic venues in Central New York will play host to some of the best vocal ensembles in the area, as five local a cappella groups come together for a concert in Hendricks Chapel on Saturday, April 11, starting at 7:30 p.m. 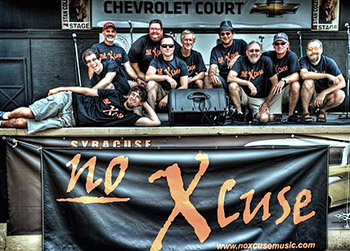 The a cappella group No Xcuse will peform at the “A Cappella for the Fellas” event at Hendricks Chapel.

The annual “A Cappella for the Fellas” concert is a benefit for the Housing and Homeless Coalition of Syracuse and Onondaga County (HHC), a community coalition that addresses homelessness and housing vulnerability by serving as a conduit for homeless services providers, as well as other public and private human services.

Appropriately for this venue, “a cappella” means “church style,” which refers to unaccompanied, ensemble singing rather than sacred music—concert-goers can expect plenty of beautiful, intricate vocal arrangements of popular songs from many eras.

The host group will be No Xcuse, which this year will include College of Law and Maxwell School Professor William C. Banks, director of the Institute for National Security and Counterterrorism, along with other core members Bob Dupre, Jim Edinger, John Finkenstadt, Chad Heffentragerr, Bill Holbert, Richard Lickfield, Sean Magee and Kraig Pritts.

Advanced tickets are now on sale for $15—call 315-478-9710. Tickets will be $20 on the night and $10 for students. For more information, contact No Xcuse via its Facebook page: https://www.facebook.com/NoXcuseMusic.