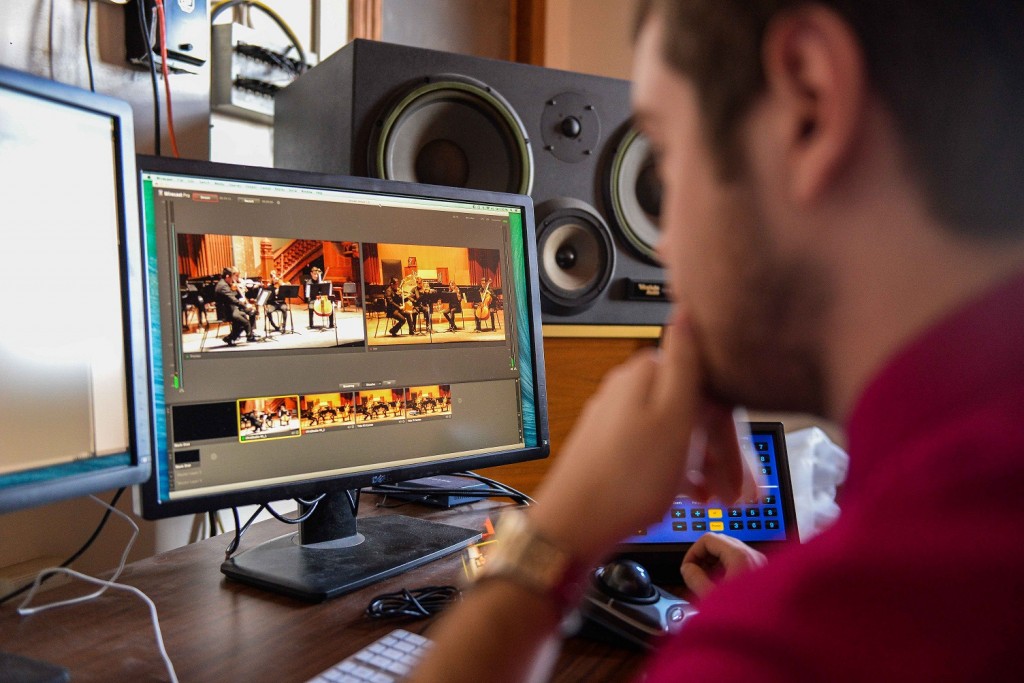 Faraway family and friends of students in the Rose, Jules R. and Stanford S. Setnor School of Music can now experience the best seats in the house during their students’ performances.

An upgraded system of high-definition cameras and related computer equipment has been installed for web streaming of live performances in the Rose and Jules R. Setnor Auditorium.

The system is in place due to the initiative of two music students who won a Fast Forward grant, funding from the College of Visual and Performing Arts (VPA), and the work of students, faculty and staff in setting up the state-of-the-art equipment.

“I am so excited that the project is complete!” says Lisa Kranz ’16, a music education major and tuba player. Kranz and Melissa A. Bassett ’14, a music major who studied percussion, helped propel the project by winning a Fast Forward grant last year.

“This means that families back at home can really enjoy the students’ concerts, recitals and performances,” Kranz says. “Having that support from home means so much when your family can’t be in Syracuse.”

Kranz has had one performance so far streamed lived using the new system—singing in a choir with the Women’s Choir, University Singers, Concert Choir and the Hendricks Chapel Choir to perform masterpieces by Bach and Vaughan Williams with the Syracuse Orchestra.

“There was a full orchestra on stage and over 100 singers, and my parents were easily able to pick me out of the crowd,” Kranz says. “I look forward to performing my senior recital and many more concerts knowing that my friends and family are watching from home.”

“It’s so incredibly high quality now,” says James Abbott, professor of practice and program coordinator for the Sound Recording Technology Program, who oversaw the project. “The cameras zoom, pan, tilt—you can zoom in so close you can read the music on the page. It’s absolutely astonishing.” 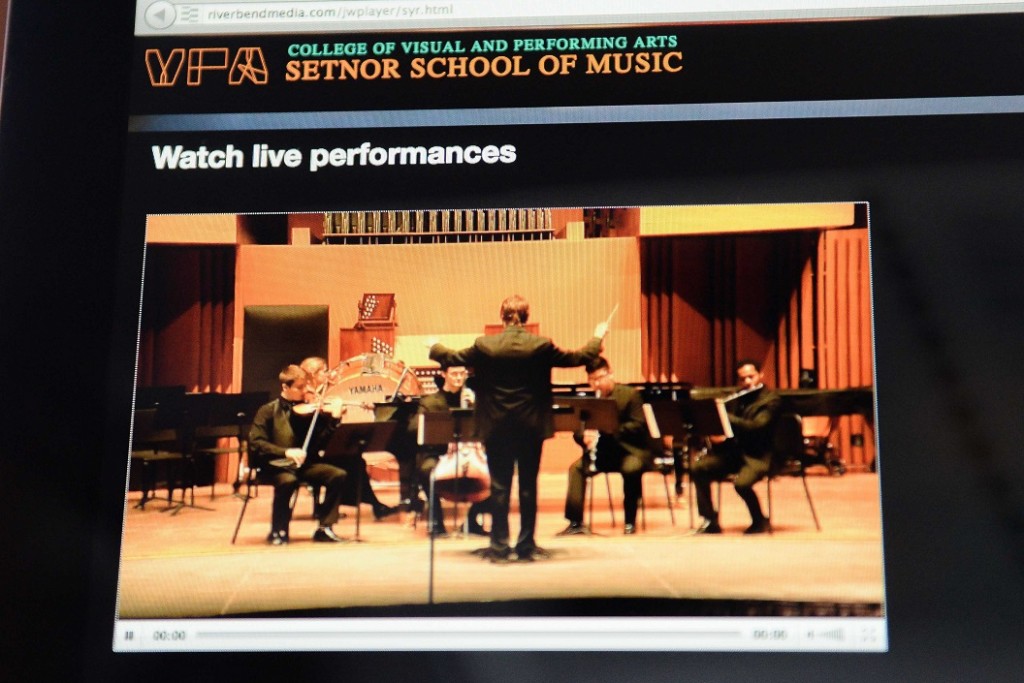 Plans to upgrade the system had been in the works previously, but financially it was a challenge.

“Crouse College is a very old building without a lot of infrastructure, so a lot of the work that went into putting in the new system was in running the wiring and conduit,” Abbott says. “Even getting power to new cameras is an adventure because obviously no one ever conceived that for Crouse Hall—as it was called for over a century.”

Starting in 1999, VPA was the first university school of music to have live audio broadcasts all of its concerts, Abbott says. About seven years later, they began experimenting with video using a webcam.

“It was a big deal; many tuned in and that’s how people were introduced to the musical offerings of our school,” he says. “The audio was great, but the video was not. But it was only intended as a webcam.”

Over the years, Internet speeds increased, along with people’s expectations of the Internet experience.

Last year, Kranz heard about the Fast Forward competition for student projects, which was part of Chancellor Kent Syverud’s inauguration, and polled fellow students about ideas. The overwhelming response was the Setnor upgrade.

“It was all student driven,” Abbott says. “They understand the value of the visual, as well as the auditory component. Fast Forward was the seed money that got the whole process started.”

Along with the high-definition video cameras, the equipment includes a computer system to crunch and code the video to send it to the streaming provider.

Abbott devised the specifications for the equipment and worked with a team of people, including Assistant Dean for Information Technology Chris Fox, in planning and implementation.

The process started in September, with determining the specifics, and continued in the fall and winter with installation work of the fiber optics and video equipment done by Visual Technologies of Syracuse and the final stages of configuring the equipment wrapping up last month. 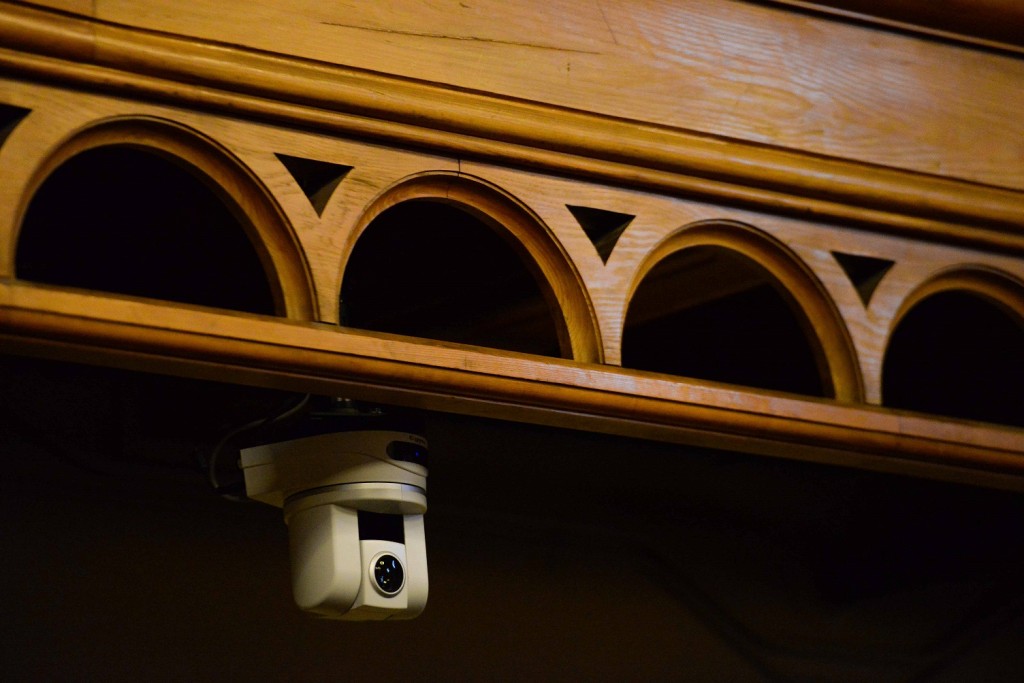 One of two new high-definition cameras positioned inside Setnor Auditorium

Setnor’s Audio Engineer, Patrick MacDougall, and music industry student Cody Engstrom ’15 set up and configured the gear and computer system in the studio. “They did a lot of experimentation to see what would work best. Cody worked many late nights and was dedicated to get it up and running,” Abbott says.

It was good timing to have it completed, as the concert hall becomes especially busy with recitals most nights of the week and during the days on the weekend. The first streamed performance, using the new system, was Feb. 21 by music student and flutist Jenna Stango ’15.

“I can’t tell you how many positive comments we’ve gotten since we made the upgrade; it’s been absolutely incredible,” Engstrom says.

For Engstrom, the quality of the personal connection has been the most compelling aspect.

“We’re trying very hard to connect further with the community outside of the Setnor School of Music—to show everyone that we’re here, we’re relevant and that music really has a large impact on everyday life and is important for everyone, not just the students and faculty,” Engstrom says.

With this new advancement, Engstrom hopes that the college can continue to make upgrades that enhance the musical experiences of students, faculty, performers and audience members, and develop that larger sense of community.

“I’m excited that now parents, families, friends and loved ones from all around the world will be able to have a streaming experience that is about as close as you’re going to get to being there,” Abbott says. “This is like having the best seat in the house.”

And the students made it happen.

“I’m always really proud of the students and what they are capable of and what they have a passion for—they really wanted this and they got it,” Abbott says. 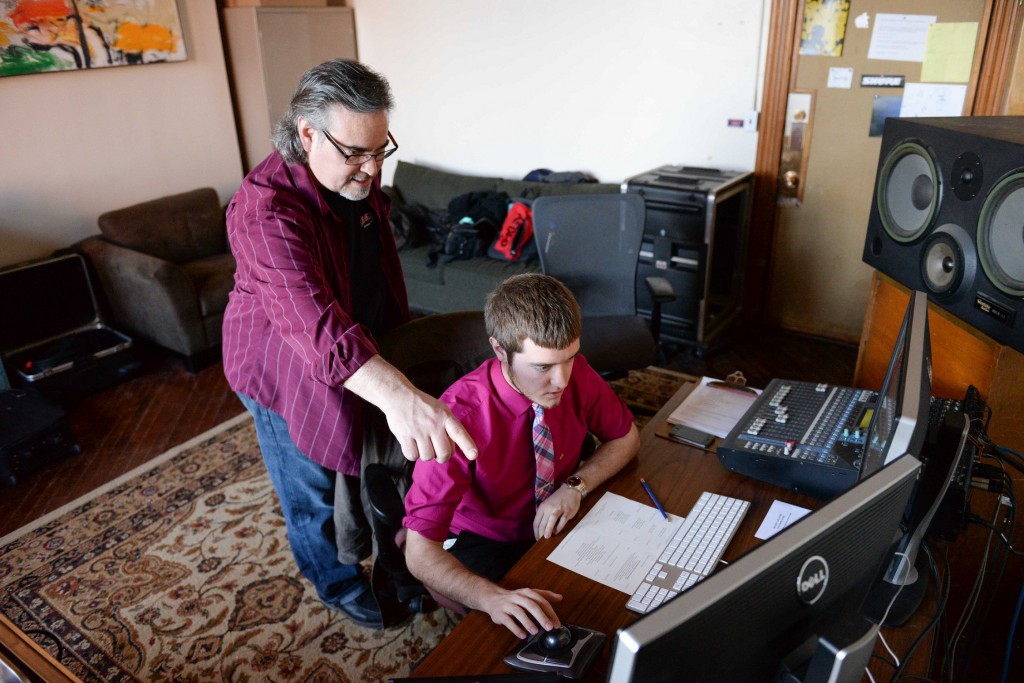