Milanoi Koiyiet is a graduate student in the College of Law. However, she is originally from Kenya, where she already has a law degree. Due to her work ensuring justice for women and girls with intellectual disabilities who have undergone sexual violence, Koiyiet got a scholarship from Open Society Foundations to come to Syracuse University and study international human rights and comparative disability law. She recently presented at the UN Commission on the Status of Women (UNCSW), and will be returning to Kenya to continue her work after graduating with an LL.M. degree in international human rights and comparative disability law this coming May . 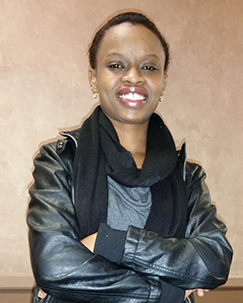 Q. Can you describe some of the work you were doing in Kenya?

A: I’m a lawyer in Kenya, focusing on women’s and girls’ rights. I’m a human rights activist and a feminist. In Kenya, just like in many other countries, gender-based violence is a big issue and there is still need for more work to be done. In a courtroom situation, rape cases are many times difficult to prove. So, I worked a lot with the police and health service providers. I trained them on laws regarding gender-based violence cases, the importance of proper handling and maintaining the chain of evidence, and giving evidence as experts in court. If those first steps are mishandled, you don’t have the evidence you need, and without that, the inherent skepticism in the courts makes it very difficult to win the case.

Q: So when did you make the shift to focusing on women and girls with disabilities?

A: I got the opportunity to work with an organization called Kenya Association for the Intellectually Handicapped, a parent-based Kenyan National Organization that works with parents and guardians of youth who are intellectually handicapped.

The organization works in different parts of Kenya and they had many cases of gender-based violence and needed legal expertise to be able to address the issue. We therefore partnered with them and implemented a project on “Enhancing access to justice and health management of sexual violence among women and girls with intellectual disabilities in Kenya.” We started with a baseline survey that showed that more than half of the women and girls with intellectual disabilities have been sexually violated more than once. I was part of the team conducting the baseline survey and the findings shocked me. I thought to myself, “Something needs to be done about this.” So, I began working closely with the Kenya Association for the Intellectually Handicapped. It was a perfect partnership; I brought the legal expertise, and they had the disability experience. Now, not only were we training police officers and healthcare workers, but also working to ensure representation for the survivors. You see, there is a terrible perception of persons with intellectual disabilities in Kenya. They are often looked at as crazy people, not to be taken seriously. My battle quickly became dealing with the existing negative attitude regarding persons with intellectual disability. Creating change is about increasing awareness and changing those negative perspectives.

Q: How are your studies in Syracuse helping you with those objectives?

A: Coming to Syracuse was a great opportunity. I received a scholarship from the Open Society Foundation so that I could come and study here for a year. Learning more about international human rights laws and comparative disability laws is helping to prepare me for my return to Kenya. I am currently working closely with Professor Arlene Kanter and Handicap International in a project known as the Making it Work project that is looking into good practices around the world.  The goal of this initiative is to increase the visibility of women and girls with disabilities within international development, human rights, gender and humanitarian action to ensure that their voices are heard on how to respond to violence, abuse and exploitation throughout the world. This is a great opportunity for me where I have gotten a chance to learn, and at the same time, to contribute.

Q: As graduation gets closer, what are your next steps?

A: Like I said before, women and girls with disabilities are left out in many discussions. They’re an afterthought. It doesn’t make sense to me. This goes back to attitude and negative perceptions that need to change. We need women’s rights organizations coming together with disability rights organizations to create a uniform platform, because there’s already so much overlap between the two when it comes to these issues. I’m always thinking, “How can I bring these two together?” After speaking at the UNCSW, I had so many people coming up to me wanting to learn more. That was incredible. I want to see women and girls with disabilities involved more in such spaces. If that happens, I’ll go to sleep a very happy person. When it comes to the union of women’s rights and disability rights, I really believe they can work together. There will be better advocacy and progress in ensuring women’s rights; there is strength in numbers.