Secretary of Defense Recognizes Work of University in Service to Military, Veterans 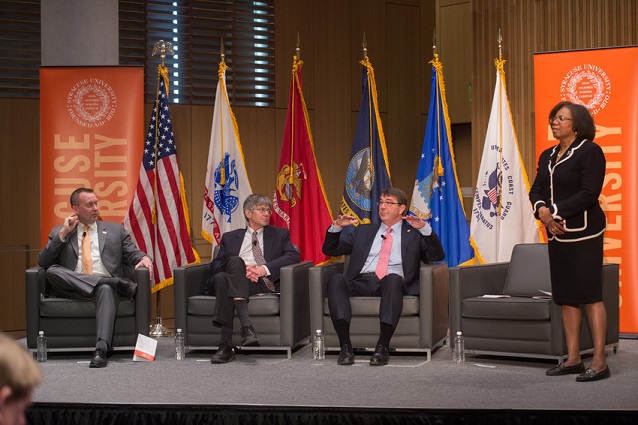 During a visit to campus Tuesday, U.S. Secretary of Defense Ashton B. Carter recognized Syracuse University for its “remarkable legacy of service” to the military and its “incredible, pathbreaking work” in assisting veterans.

Carter was briefed by University administrators Tuesday morning on the University’s history and programs with the military and veterans and the work of the Institute for Veterans and Military Families (IVMF).

He later addressed a crowd of about 400 people in the Melanie Gray Ceremonial Courtroom in Dineen Hall and answered questions from several students in the audience.

“You have done so much to welcome our veterans and their families and now to do what we really need, which is to couple thoughtful, intellectual work to understand the opportunities … tremendous opportunities represented by this amazing group of people we call our veterans,” Carter said.

He noted the “essential” work of the IVMF, which is “sadly not replicated anywhere else in the whole country.” He also spoke of a recent partnership with Syracuse University, the Schultz Family Foundation and the Department of Defense, called Onward to Opportunity, a new national program that will deliver tailored, industry-specific training and certifications to service members and spouses on U.S. military bases prior to transition.

Carter’s visit was a historic first for the University: the first time a sitting secretary of defense has visited Syracuse University, said J. Michael Haynie, vice chancellor for veterans and military affairs and IVMF executive director.

“As a consequence we’re adding yet another chapter to this institution’s long and storied connection to our national defense and our nation’s veterans,” Haynie said.

He noted such University programs as the Defense Comptrollership Program, National Security Studies and Military Photojournalism Program, as well as Chancellor Kent Syverud’s decision last year “to elevate Syracuse University to become a national exemplar in higher education for how we support and empower and serve this generation of military veterans.”

Maxwell School Dean James B. Steinberg, who introduced Carter, said Carter’s visit was meaningful for several reasons, including “his dedication to public service—something that resonates strongly with us here at Syracuse and at the Maxwell School of Citizenship and Public Affairs.”

Steinberg also recognized Carter as an interdisciplinary scholar, with a knowledge background in physics as well as global policy, and his dedication to military men and women, which brought him to Syracuse University. 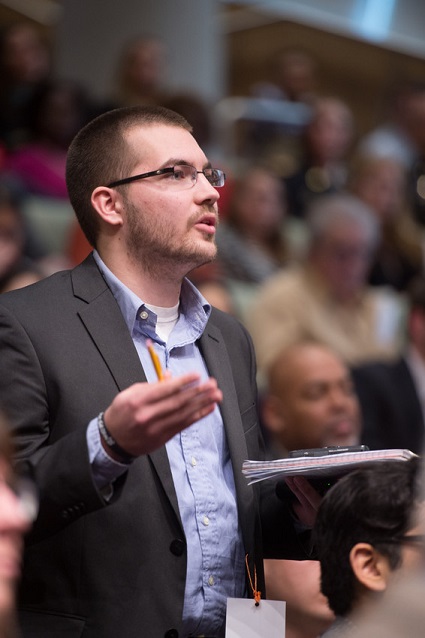 Carter, who was nominated to his post by President Barack Obama and confirmed by Senate vote last month, said his priority is that of ensuring the United States continues to have “the finest fighting force the world has ever known” for generations to come.

He discussed how the military has to be able to recruit and attract the best. The challenge is to connect with the next generation, recognizing that each generation is different and how they think about their careers.

At a visit Monday at Fort Drum Army Base in Watertown, N.Y., Carter met with military members and spouses to learn from them about their considerations when thinking about their continued military career—and how to retain them—or their decision to leave the military.

If members decide to leave the service, “that is a loss for us, but a gain for the country because I think our people are some of the most promising, constructive, well-contributing citizens we have,” Carter said.

“Our obligation to the country and to them is to help them transition from military life to civilian life,” said Carter, noting the work of the military’s programs to help veterans in this way.

“The way we’ll know how to improve our game is to build our programs on the back of careful research of a kind as I said earlier that this institution—and this institution almost alone in our country—is actually doing, so we’re hugely dependent on the intellectual foundation of Syracuse University,” Carter said.

Carter said the president has been adamant that he wants a good deal—one that keeps the United States and the region safe from Iranian nuclear ambitions.

As the secretary of defense, Carter said he is responsible for looking at and understanding the broader security picture. “This is a piece of the overall mosaic in security in that part of the world,” he said.

Sophomore Justin Mattingly asked Carter about the Department of Defense’s decision to partner with Syracuse University.

“There’s a level of commitment and sophistication to the thinking here that we really need,” Carter said. As secretary of defense, one of the greatest frustrations “is when you’re forced to make a decision or to act and you know the basis upon you’re doing so isn’t completely solid,” Carter said. The military needs a more refined intellectual basis to act on this important mission through training and scholarship “and there’s no other place that does it like Syracuse.”

Another student, Alexandra Hackbarth, who is in the master’s of public administration/international relations program (MPA/IR), questioned Carter about the United States’ guiding principles in its strategy in the Middle East.

Carter said it is a confusing time in the region with various factions, “but our interests are the anchor and point of departure for policy.”

For example, in Iraq, “the defeat of ISIL is going to require a force that will make defeat lasting,” made possible through a stable Iraqi government, he said.

Another MPA/IR graduate student, Allie Carter Olson, spoke about the U.S. military’s recent mission in helping to fight Ebola in West Africa and whether the United State should push other countries or agencies to develop skills to deal with these kinds of concerns.

“I’m incredibly proud of what we did do,” Carter said, adding the international global health system should be doing a better job without the contribution of the U.S. military.

However, in those situations, the actions of our military speak to the world about our values as a nation and why we have so many allies, Carter said. “One of the ways that we show that is when we bring a capability designed for an entirely different purpose to bear on human suffering in a different domain,” he said. 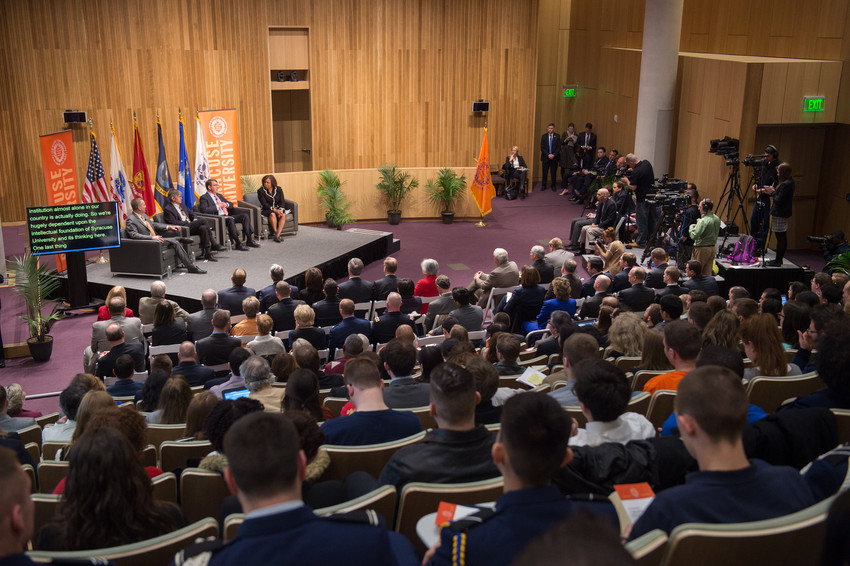