Savannah Guthrie, co-anchor of “Today” and NBC News chief legal correspondent, will serve as emcee for the ninth annual Mirror Awards ceremony, which will be held Thursday, June 11. The event will run from 11:45 a.m. to 2:30 p.m. at Cipriani 42nd St., New York City. 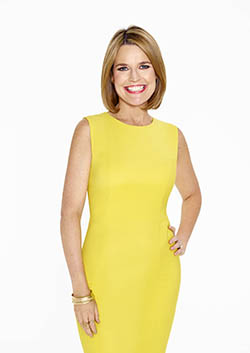 Hosted by the Newhouse School, the ceremony will include the presentation of six juried journalism awards and two special awards. Register online at http://mirrorawards.com.

The Mirror Awards are the most important awards for recognizing excellence in media industry reporting. Established by the Newhouse School in 2006, the awards honor the journalists who hold a mirror to their own industry for the public’s benefit.  Award categories include:

Guthrie joined “Today” as a co-host of the third hour and chief legal correspondent in June 2011. She has conducted a wide range of exclusive newsmaker interviews, including President Barack Obama, former U.S. Secretary of State Hillary Clinton, Facebook founder and CEO Mark Zuckerberg, U.S. Ambassador to the U.N. Samantha Power and former U.S. Representative Gabby Giffords. She has sat down with other notable figures and celebrities from Meryl Streep and Johnny Depp to Cleveland kidnapping victim Michelle Knight and former Navy SEAL Robert O’Neill. Guthrie has anchored major news events including the Boston Marathon bombing, the Charlie Hebdo shooting in Paris and the 2013 Moore tornado. She has also anchored from the 2014 Winter Olympics in Sochi and the 2012 Summer Olympics in London. As part of her work on “Today,” she received a 2011 Daytime Emmy for Outstanding Morning show.

Prior to joining “Today,” Guthrie served as NBC News White House correspondent from December 2008 to June 2011, contributing to all NBC News properties, including “NBC Nightly News,” “Today” and MSNBC. Guthrie also served as co-host of MSNBC’s “The Daily Rundown” from January 2010 to June 2011.

As NBC News White House correspondent covering the 2008 presidential elections, Guthrie traveled with Sarah Palin’s campaign and was part of the NBC team that ultimately won a 2009 Emmy for its coverage on election night. In May 2011, Guthrie reported exclusive details of the events surrounding Osama Bin Laden’s death.