The life and legacy of one of the University’s most illustrious professors is the focus of a two-day symposium in the College of Arts and Sciences (A&S). 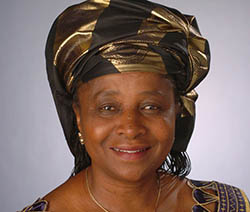 Mĩcere Gĩthae Mũgo, a Meredith Professor of Teaching Excellence in the Department of African American Studies (AAS), will be feted at a special program titled “A Tireless Pursuit,” April 2-3. The symposium will feature events and activities, highlighting her work as a teacher-scholar, activist, poet, playwright and family person.

“A Tireless Pursuit” comes on the eve of Mũgo’s retirement from AAS, whose faculty she joined in 1993, and features presentations by more than two dozen colleagues from around the world.

“Professor Mũgo leaves behind a legacy of inspired teaching and mentorship,” says Karin Ruhlandt, dean and Distinguished Professor of Chemistry in A&S. “She has increased our understanding of and appreciation for African cultural traditions, as well as women’s rights and education. This has resulted in a more inclusive culture at Syracuse, while raising the profile of our African American studies department.”

“A Tireless Pursuit” begins on Thursday, April 2, at 6:30 p.m. with a dinnertime event in the Marvin and Helaine Lender Auditorium in the Whitman School of Management. Titled the “Mũgo Scholarship and Legacy Presentation,” the program includes remarks by the following:

• Ngũgĩ wa Thiong’o, Distinguished Professor of English and Comparative Literature at the University of California, Irvine;
• Peter Anyang’ Nyong’o, senator of Kisumu County in Nyanza, Kenya;
• Naana Banyiwa Horne, associate professor of English at Santa Fe College (Fla.); and
• David Johnson, professor of comparative and international education and a fellow of St. Anthony’s College at the University of Oxford (U.K.).

The symposium continues on Friday, April 3, with scholarly presentations, roundtable discussions and performances from 9 a.m. to 6 p.m. at Drumlins (800 Nottingham Rd., Syracuse). Dozens of people are expected to participate, including:

The symposium is co-organized by AAS and the University’s Africa Initiative, with generous assistance from A&S and the Humanities Center. Other sponsors include the Mũgo family, the Community Folk Art Center (CFAC) and the David B. Falk College of Sport and Human Dynamics.

The timing of the symposium is not lost on Kishi Animashaun Ducre, associate professor and chair of AAS; it coincides with the 50th anniversary of several African countries’ independence, including that of Mũgo’s native Kenya.

“Special emphasis will be placed on the role of orature [i.e., spoken word], as a form of resistance art,” Ducre says. “Mĩcere is a pre-eminent scholar and practitioner of orature, as used in the fight for African independence, human empowerment and critical social justice.”

Co-organizer Herbert Ruffin is associate professor of AAS: “Mĩcere is so widely respected and has accomplished so much that trying to fit everything—and everyone—into a two-day program has been challenging. We expect approximately 150 people, many of whom are traveling from Africa at their own expense.”

As a teacher-scholar of African orature, Mũgo is virtually without peer. She has written and lectured extensively on the subject and has organized numerous events, including campus visits by Wangari Maathai and Wole Soyinka, winners of the Nobel Peace Prize and the Nobel Prize in Literature, respectively.

One of Mũgo’s more memorable public appearances occurred at the University in 2006, when she was invited to speak at the international summit “Small World/Big Divides: Building Bridges in an Age of Extremes.” Prior to Syracuse, she held faculty positions at Cornell and St. Lawrence universities and at the universities of Zimbabwe and Nairobi.

Administratively, Mũgo is equally impressive. As chair of AAS, she was instrumental in launching the M.A. in pan African studies program in 2005. Mũgo has also served as director of AAS’ graduate studies program and as the first full-time director of the Africa Initiative. She has held leadership positions at other institutions, including the University of Nairobi, where she served as the first female dean of an African university, before being forced into exile with her two daughters, Mũmbi wa Mũgo and the late Njeri Kũi Mũgo, in 1982.

“Her commitment to orature is rooted in her advocacy of African indigenous knowledges as critical sites for academic engagement, following years of systemic marginalization, even silencing, under colonization, neo-colonization and imperialism,” Ducre adds.

Mũgo is the author of six books and four monographs, as well as the editor of eight supplementary school readers and the journal Third World in Perspective (Third World Conference Foundation). She is well-known for the 1977 play, “The Trial of Dedan Kimathi,” which she co-wrote with Thiong’o. Last year, it had a highly publicized 10-day run at UC Irvine.

Mũgo has been recognized many times throughout her career. In the past two years alone, she has been named an Elder of the Order of the Burning Spear, Kenya’s highest honor; has received the Flora Nwapa Award for excellence in Africana literature; has been inducted into Phi Beta Kappa Society (the oldest honor society for the liberal arts and sciences); and has been invited to speak at the United Nations.

A committed community activist, Mũgo belongs to numerous organizations, including the Ghana Society of Central New York, PACCNY and UWAO, the latter two of which she founded and has served as inaugural president. She participates on many other boards of directors, editorial boards and advisory boards around the globe.

“Mĩcere is more than a colleague, mentor or former professor,” says co-organizer Kheli Willets ’92, G’94, G’02, executive director of CFAC and professor of practice in AAS. “She’s also more than an artist, playwright, activist and scholar. Mĩcere is a source of support, encouragement and, at times, a flicker of light in the darkest of moments. I wish her well, as she continues to engage with and impact the world.”