Secretary of Defense Ashton B. Carter to Visit Campus March 31 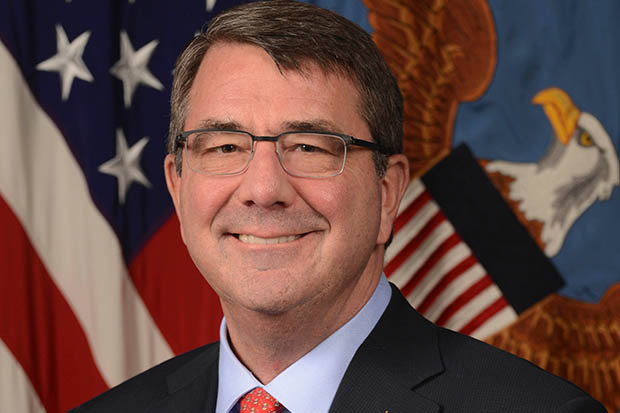 On his first domestic trip since taking office, Secretary of the United States Department of Defense Ashton B. Carter will visit Syracuse University to discuss with students and invited guests the “Future of the Force” and how the Department of Defense (DOD) recruits, retains and transitions our next generation of service members during an event hosted by the College of Law.

Secretary Carter’s remarks will commence at 10:40 a.m., on Tuesday, March 31, in the Melanie Gray Ceremonial Courtroom in Dineen Hall. A brief question-and-answer session will follow.

Tickets are required and can be obtained from the Schine Box Office beginning Monday, March 30, at 9 a.m., and will be distributed on a first-come, first-served basis. A valid SU or SUNY ESF I.D. is required. Doors will open on March 31 at 9:10 a.m. for security screening and guests should plan to arrive early and be seated by 10:10 a.m. No admittance will be allowed after 10:10 a.m. Backpacks and other large bags are not permitted.

Secretary Carter’s address will follow a closed-door roundtable discussion with the ‎Institute for Veterans and Military Families (IVMF). The roundtable—to include Chancellor Kent Syverud; Vice Chancellor for Veterans and Military Affairs and Executive Director of the IVMF J. Michael Haynie; members of the IVMF leadership team; and invited guests—will provide an opportunity to brief Secretary Carter on the IVMF, its programs, research, community engagement and collaborations enacted in service to America’s veterans and military families. The roundtable will also include a discussion on transitioning our force back into society and how the IVMF is leading this charge.

Earlier this month, the U.S. Department of Defense, the IVMF at Syracuse University, and the Schultz Family Foundation announced the launch of Onward to Opportunity, a groundbreaking new national program that will deliver tailored, industry-specific training and certifications to service members and spouses on U.S. military bases prior to transition. This program will provide participants with skill sets to immediately qualify them to work for leading U.S. companies, resulting in a seamless transition from military careers to civilian employment.

“The purpose of the Secretary’s visit to Syracuse University is twofold,” states Haynie. “Secretary Carter is keenly interested in learning more about Syracuse University’s historic commitment to veterans and IVMF’s mission to fully leverage the intellectual, human and social capital of higher education, in service to America’s veterans and their families.”

Secretary Carter is also looking forward to having an open discussion with the students at Syracuse University, primarily those enrolled in the Maxwell School of Citizenship and Public Affairs and the S.I. Newhouse School of Public Communications, due in large part to their national rankings and reputation as the premier institutions in their respective disciplines.