Law Student Elected to ABA’s Board of Governors

Christopher Jennison, a second year law student at the College of Law, has been elected as the Law Student at-Large for the American Bar Association’s Board of Governors. In this role, Jennison will not only have full voting rights on the board, but will also be representing the interests of law students at the nation’s more than 200 ABA accredited law schools. 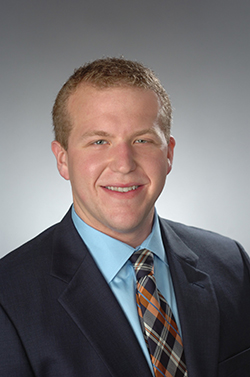 The ABA is one of the world’s largest voluntary professional organizations, with nearly 400,000 members who are lawyers, law students and others interested in the law and the legal profession. Its mission is to support the legal profession with practical resources for legal professionals while improving the administration of justice, accrediting law schools, and establishing model ethics.

Jennison, 24, from Silver Spring, Md., was one of several law students who were considered for the position. During his two years at the College of Law, he has served in various roles for the ABA including membership on the Board of Governors of the Law Student Division, and was the law student liaison to the Standing Committee on Continuing Legal Education. Additionally, he recently received the Law Student Division’s Gold Key Award, the highest award of the organization, given to a student who has devoted extraordinary time and effort in pursuing the goals of the division and the ABA.

The Law Student Division Board voted for Jennison to be their voting representative on the ABA’s board during their recent meeting in Las Vegas on March 15. He will be in training for several months before taking office at the conclusion of the ABA Annual Meeting in Chicago in early August. Jennison will then serve as the Law Student at-Large for the ABA’s Board until August 2016.

“It is an honor to represent not just Syracuse University College of Law but also the interests and needs of all law students. The board position will allow me to leverage the understanding of issues in legal education and the relationships that I have developed to best represent law students going forward,” says Jennison.

Jennison graduated from Syracuse University in 2012 with dual majors in public relations from Newhouse and policy studies from Maxwell. He also earned a master’s in public administration from the University of Pennsylvania in 2014.

He is currently focusing his studies on criminal law and procedure at the College of Law, and hopes to clerk after law school for a federal or state judge in Maryland and eventually work as a prosecutor.

At the College of Law, Jennison keeps a busy schedule. He is a law ambassador, a member of the Moot Court Honor Society, lead articles editor of the Syracuse Law and Civic Engagement journal (SLACE), and also volunteers as an emergency medical technician with Syracuse University Ambulance.