Campaign Encourages Women to Say ‘I Am Enough’

“However many people that can feel great, even if it’s just a day or a week, that’s the whole goal of it,” says Sara Eckhardt, the founder of the I Am Enough movement at Syracuse University. Eckhardt created I Am Enough to be a new voice in women’s empowerment, and her campaign is rapidly gaining momentum not only in the Syracuse community, but on other college campuses as well. 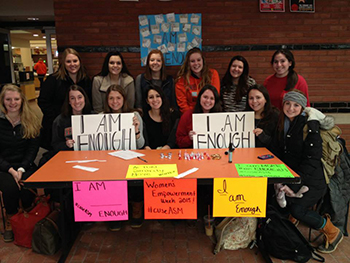 I Am Enough team members and their supporters staff an information table in Schine Student Center.

“There’s this idea that women are often expected to look and act a certain way, but I Am Enough is about empowering yourselves to be comfortable in your own skin,” says Eckhardt. She elaborates that there is an enormous sense of pride that comes with accepting who you are, just as you are.

She was inspired to start the campaign after viewing a TED talk given by Brene Brown, titled “The Power of Vulnerability,” and began by working with fellow sisters of the Alpha Gamma Delta (AGD) sorority here at Syracuse University. Right from the start, they had high ambitions.

“We wanted to be campus wide; not just Greek life, and not even just targeting women,” says Eckhardt. She continues, “I’m very happy with the way it’s turning out. I was really impressed with the number of guys that showed support. Obviously women face pressures, but men deal with a lot of social pressures, too.”

I Am Enough has gained momentum in just a few short months. “Sara thought of the whole campaign last fall, and once we got back from winter break, it was all execution,” says Michaela Hilgers, a sister of AGD. “She just joined last semester, and to see her take the reins on something like this is so awesome.”

I Am Enough started as a small presentation during Alpha Gamma Delta’s Greek recruitment week, but rapidly expanded through social media marketing to become a prominent new advocacy group on campus. The campaign page has already accumulated over 800 likes, and the number continues to grow. In addition to sharing inspirational content, the page publishes photos of supporters holding “I Am Enough” signs. Users are encouraged to create their own, personalized “I Am Enough” signs and share them on the page; they’ll be featured in a separate post and added to the campaign album.

“It’s so simple to get involved, and it has a great message. We’ve seen a big positive response already,” says Emily Visich, an AGD sister involved in the campaign.

Now, I Am Enough is getting support and acknowledgement from other advocacy groups on campus, such as the Girl Code Movement, the Whitman Women in Business Club and SASSE,  (Students Advocating Sexual Safety and Empowerment). Furthermore, AGD chapters at Duquesne, Lycoming College and the University of Maryland have all reached out to Eckhardt and are beginning to expand the Syracuse-founded campaign to their schools. There is even a fraternity at Loyola Marymount in southern California that wants to bring I Am Enough to their campus.

“We’re hoping to make this an annual week,” says Eckhardt of the future of I Am Enough. “I want it to continue to remind us that we have a say, to continue shattering stereotypes.” First steps will be expanding throughout the Greek community here at Syracuse, and then reaching out to other campus organizations through their existing partnerships with advocacy groups. Eckhardt also continues to assist organizations at other schools with bringing I Am Enough to their campus.

Those wishing to get involved with the campaign can contact Eckhardt and her supporters through the I Am Enough page. Like and follow I Am Enough to get updates about new events and initiatives, and learn how you can help spread their message of positivity, acceptance and empowerment.