Panel on Whistleblowing and Journalism to Be Held April 1

Over the past several years, the American media have sharply increased their coverage of scandals that have been brought to light by whistleblowers, including NSA spying, banking fraud, contaminated food and nuclear safety risks. The stakes for the public—and to the whistleblowers and investigative journalists who disclose wrongdoing and corruption—have never been higher. 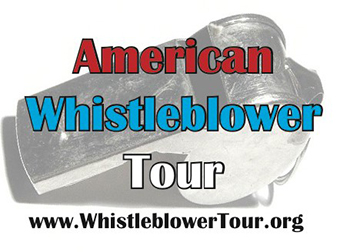 Syracuse University and the Government Accountability Project (GAP) will host a panel discussion on whistleblowing and journalism as part of GAP’s American Whistleblower Tour. “The Whistleblower, The Press and the Truth” will be held April 1 at 7 p.m. in the Joyce Hergenhan Auditorium in Newhouse 3. The event will explore the important role whistleblowers and the press play in promoting accountability and the challenges they face in speaking truth to power about wrongdoing and threats to the public interest.

In addition to the panel discussion, several other public events will be held:

All Whistleblower Tour speakers and Shetterly will also give several guest lectures at the College of Visual and Performing Arts (VPA) and the Leaders for Democracy Fellowship program in the Maxwell School of Citizenship and Public Affairs.

Borjesson has been a freelance journalist for more than 30 years. She is the editor of “Into the Buzzsaw: Leading Journalists Expose the Myth of a Free Press,” for which she wrote a chapter detailing the investigation of the TWA Flight 800 crash. She later wrote, produced and directed the feature-length investigative documentary “TWA Flight 800,” which aired on Epix. She is also the editor of “Feet to the Fire: The Media After 9/11, Top Journalists Speak Out.”

Clark is president and corporate and financial accountability director of GAP, the nation’s leading whistleblower protection organization. Through litigating whistleblower cases, publicizing concerns and developing legal reforms, GAP’s mission is to protect the public interest by promoting government and corporate accountability. Clark serves as a spokesperson and public ambassador for GAP, and frequently negotiates with government and corporate officials about legal cases and social reform initiatives. He also oversees numerous cases involving widespread financial fraud. He was the first recipient of the Hugh M. Hefner First Amendment Award for Government and was also honored with the Gleitsman Citizen Activist Award.

Tamm was an attorney in the U.S. Department of Justice’s Office of Intelligence Policy and Review when he became aware of a program that bypassed the Foreign Intelligence Surveillance Act (FISA) court. After his inquiries about the program went unanswered, he contacted The New York Times, which in 2005 ran a Pulitzer Prize-winning cover story about the George W. Bush administration’s wiretapping program. The program was part of wide-ranging covert surveillance activities authorized by Bush in the aftermath of 9/11. The law creating the FISA court made it a federal crime for any official to engage in such surveillance absent adherence to strict rules, including court approval. Tamm became a target of law enforcement officials. In August 2007, 18 FBI agents raided his home, executing a search warrant in an attempt to locate the source of the Times story. Tamm was also the subject of a six-year federal criminal investigation. He was honored in 2009 with the Ridenhour Prize for Truth-Telling.

About the American Whistleblower Tour

The events, which are free and open to the public, are co-sponsored by the Tully Center, the Maxwell School and VPA. For more information, contact James Clark at 315-443-8072 or jaclark@syr.edu.