On Wednesday, March 25, world-renowned actor, producer and engaged humanitarian Forest Whitaker will speak for the fourth annual “Truth Be Told” event. The “Truth Be Told” speaker series is organized by the Delta Zeta chapter of Alpha Phi Alpha Fraternity. The talk will begin at 7 p.m. in Hendricks Chapel. 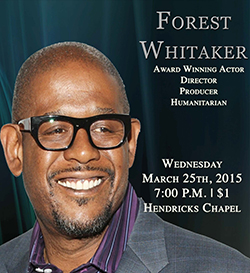 The “Truth Be Told” speaker series aims to bring influential speakers to campus to share their views on a variety of timely topics. Whitaker’s talk is entitled “The New American Opportunity,” and will discuss the truth behind opportunity in our society.

“We are honored to have Forest Whitaker as our speaker for the fourth annual Truth Be Told event,” says Michael George, Alpha Phi Alpha Fraternity member and organizer of the event. “We look forward to hearing his perspective and candid thoughts on the concept of opportunity.”

Whitaker’s film career spans more than 30 years, with roles in television and movies, including his Academy Award-winning performance in “The Last King of Scotland.” Besides his career as an actor, Forest Whitaker has devoted most of his time over the past decade to his work as humanitarian. His commitment to peace and social issues has led him to work in close collaboration with UNESCO as its Special Envoy for Peace and Reconciliation. He also founded in 2012 the Whitaker Peace & Development Initiative, a nonprofit that empowers young people to become active leaders in their communities, in such places as Uganda, South Sudan and Mexico.

Tickets are $1 and on sale now at the Schine Box Office.