SU Drama Tackles the Bard and Blasphemy in ‘Measure for Measure’

Hypocrites, beware! Such is the matter of this profound and intriguing late comedy by Shakespeare. When Duke Vincentio of Vienna inexplicably hands over power to Lord Angelo, a man of self-professed puritanism, he lays a trap that ensnares the falsely virtuous and rewards the just and true. Like most Shakespearean comedies, the course to the truth is neither smooth nor easy, but it is filled with engaging characters and extraordinary events, and even concludes with multiple marriages—however unlikely that may sometimes seem. 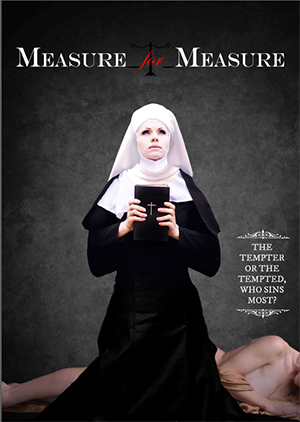 Presented by the Department of Drama in the College of Visual and Performing Arts (SU Drama), “Measure for Measure” performs March 27 through April 12 in the Loft Theater at the Syracuse Stage/Drama Complex, 820 E. Genesee St. Tickets range $17-$19 and can be purchased at http://vpa.syr.edu/drama/tickets, by phone at 315-443-3275 or in person at the Box Office, Monday through Friday, 10 a.m.-5 p.m.

Shakespeare set “Measure for Measure” in Vienna during the 1600s. Director Celia Madeoy has advanced the time period of this production to around the 1880s, when, similarly to Shakespeare’s Duke Vincentio, Austrian Crown Prince Rudolf was seeking social reform.

Through a series of secrets and false identities, the characters question morality, justice and freedom. This demands a strong ensemble, with many actors portraying more than one role.

“‘Measure for Measure’ was written in 1604, and still it presents a powerfully provocative, timely and extremely modern debate,” says Madeoy, an assistant professor for SU Drama. “It is a play about human contradiction—I can be this, and I can also be that. I want our actors to access and relish the play’s language and bring it to life for audiences.”

Performing in the intimate Loft Theater, “Measure for Measure” takes advantage of a flexible space where the audience is face to face with the action, including elements of sound, dance and stage combat. Scenic designer Maria Marrero was tasked with creating an acting space that allowed for dynamic action and quick changes of setting. With limited available square footage on the ground, the answer was to build up.

“We created levels, which allow for having a dozen or so actors on the stage at one time,” says Marrero, a faculty member in SU Drama’s theater design and technology program. “In addition, we created several options for exits and entrances, so that as one scene ends, another scene could begin immediately in a different space.”

The Loft Theatre is located on the second level of the Syracuse Stage/Drama Complex. Seating will be general admission. To enter the building, patrons may use the side entrance located on Irving Avenue under the red awning, the same entrance that is used for performances in the Storch Theatre.