One Syracuse icon will honor another when professor Marvin Druger dedicates part of historic Holden Observatory in memory of his late wife, Patricia G’74. 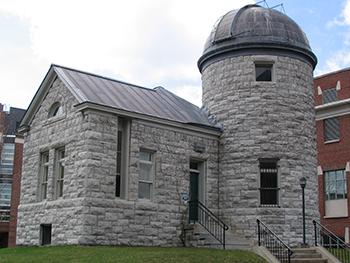 On Saturday, March 28, the College of Arts and Sciences will unveil the newly renovated Patricia Meyers Druger Astronomy Learning Center at Holden Observatory. A special ceremony will take place at 11 a.m. in Hendricks Chapel and will feature remarks by Druger and the following:

• Kent Syverud, chancellor and president of the University;

• Karin Ruhlandt, dean of Arts and Sciences and Distinguished Professor of Chemistry;

• A. Alan Middleton, professor and chair of physics; and

Afterward, guests may attend a reception in the Heroy Geology Laboratory Atrium or participate in guided tours of Holden Observatory.

Everything is free and open to the public, but attendees are encouraged to register. To R.S.V.P., contact Lisa Balogh at 315-443-1995 or lbalogh@syr.edu by Tuesday, March 24.

Although Hendricks and Heroy are wheelchair accessible, Holden is not. Plans are underway for a curved, wheelchair-accessible ramp to be built there this summer. Images of Holden’s interior and of the planned ramp will be on display at the reception.

“It’s a wonderful place to learn about the universe and to think about life on our planet,” says Druger, professor emeritus of biology and science teaching, says of the new center. “Students are now able to study astronomy in a much more exciting and appropriate setting.”

A longtime administrator in the Department of Biology and the Writing Program, Patricia Druger passed away in January 2014 at the age of 75.

Because of his wife’s love of astronomy, Druger decided to refurbish Holden Observatory in her memory. Five months of interior reconstruction have led to the main floor being transformed into an interactive learning space for the teaching of introductory astronomy.

“The Patricia Meyers Druger Astronomy Learning Center is an expression of Marvin’s love for Pat, as well as the college’s commitment to undergraduate teaching and research,” Ruhlandt says. “Thanks to Marvin’s generosity and vision, which has been embraced by Chancellor Syverud, the building is being restored to its original purpose—for students to conduct innovative lab work in an observatory.”

Adds Middleton: “Astronomy seeks to understand the structure and evolution of the universe, from planets to galaxies to the Big Bang. This new center helps us communicate the excitement of this subject to our students. The dedication marks the culmination of more than a year of planning, design and construction, involving many teams of people.”

The second-oldest building on campus, Holden Observatory was been an architectural icon since its opening in 1887. Arguably, its high-water mark was 1937, when lines of people snaked around the building, hoping to catch a glimpse of Mars passing by Earth through the observatory’s enormous telescope.

Since then, the 320-ton limestone structure has undergone many modifications, including being moved in 1991—over a three-day period, at a rate of four inches per hour—to its present location near Crouse College. (The observatory originally stood near the current site of Eggers Hall.) Several years later, the telescope, which is housed in a tower with a rotating dome, was restored. 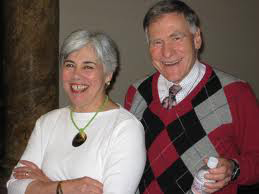 Druger thought of doing something in his wife’s memory when students on his campus tours began peppering him with questions about that “old gray building.” The result? He helped establish the Pat Project Fund, which has underwritten most of the renovation.

“I made a donation because I loved Pat so much,” Druger adds. “I hope that, for the next hundred years, people will look at her photo on the wall of the observatory and say, ‘Wow! Isn’t she beautiful?’ … And she was, in so many ways.”

Contributions to the “Pat Project Fund” are still needed. To support the fund, send a check to Karen Weiss Jones, assistant dean for advancement, at 312 Hall of Languages, Syracuse, NY 13244. The check should be payable to “Syracuse University” and include “Pat Project-Holden” on the memo line. For more information, contact Weiss Jones at 315-443-2028 or kmweissj@syr.edu.