The Raymond Carver Reading Series in the College of Arts and Sciences continues with E.C. Osondu G’07, the series’ James Breuer Distinguished Author. 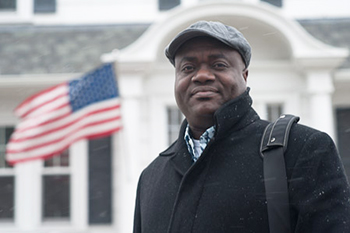 On Wednesday, March 25, Osondu will participate in a Q&A session from 3:45 p.m. to 4:30 p.m., and then will give an author reading at 5:30 p.m. Both events take place in Gifford Auditorium and are free and open to the public.

The Carver Series is presented by the M.F.A. program in creative writing, in conjunction with the English department’s “Living Writers” (ETS 107) course. For more information, call 315-443-2174.

A former advertising copywriter, Nigerian-born Osondu is the author of “This House Is Not for Sale” (HarperCollins Publishers, 2015). The novel is a tale of family and community and, according to Publishers Weekly, captures the “depth and breadth of African society.” The house in question is said to act as a “prism, through which to depict the events of the neighborhood, proving that our stories outlive the places we inhabit.”

A graduate of Syracuse’s M.F.A. program in creative writing, Osondu is an associate professor of English at Providence College, where he specializes in composition and literature as well as fiction writing. At Syracuse, Osondu was a University Fellow and the inaugural recipient of Stone Canoe’s Allen and Nirelle Galson Prize for Fiction.

Osondu is perhaps best known for the short-story “Waiting,” which won the 2009 Caine Prize for African Writing. The story examines life in a refugee camp, as seen through the eyes of a Nigerian child. Osondu was inspired to write it after volunteering for a University program that helped Sudanese and Somalian refugees resettle in Central New York.

“[‘Waiting’] isn’t pretentious nor rife with literary trickery,” says Meakin Armstrong, fiction editor of Guernica: A Magazine of Art & Politics, which published the piece. “It’s simply a well-told story about a kind of life most of us couldn’t even begin to imagine.”

Osondu’s other stories include “Janjaweed Wife,” winner of the 2011 Pushcart Prize; “Jimmy Carter’s Eyes,” a finalist for the 2007 Caine Prize;  and “A Letter from Home,” voted one of the Top 10 stories on the Internet in 2006.

His first literary collection, “Voice of America: Stories” (HarperCollins, 2010), is said to explore the “vast cultural chasm” between the United States and Nigeria.

“[Osondu’s] richly shaded tales explore old ways and new, wealth and poverty, myth and misapprehension,” Booklist says of the collection. “Though there is sadness here, the tone is deadpan, and the reader can imagine the storyteller’s eyes crinkled in a smile.”