Albert Maysles ’49 was not one for stealing the spotlight, although much of his career was spent filming those who reveled in it. 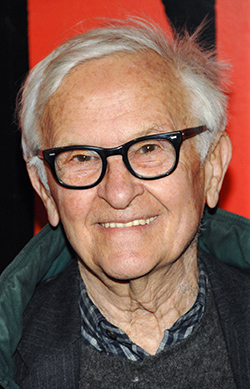 A graduate of the College of Arts and Sciences, Maysles died on March 5 at his home in Manhattan. He was 88. According to his daughter Sara, he had been diagnosed with pancreatic cancer a month before his death.

“While we mourn the loss of Albert, we also celebrate his remarkable life and hope that it serves as inspiration to people around the world to be willing to push themselves, creatively, and [to] take the time to observe and reflect on life, as it unfolds,” says Erika Dilday, executive director of the Maysles Documentary Center in Manhattan.

Maysles (pronounced MAY-zuls), along with his late brother, David, is remembered as a pioneer of direct cinema—a documentary genre devoid of scripts, sets, interviews or narration. Maysles’ more than 50 films include some of the most iconic in documentary history: “What’s Happening! The Beatles in the U.S.A.” (1964); “Salesman” (1969); “Gimme Shelter” (1970); and “Grey Gardens” (1975), which was later adapted into a Broadway musical and a made-for-TV movie.

Almost no one was too famous—or infamous—to escape Maysles’ keen eye. His subjects ranged from the ordinary, such as a traveling Bible salesman, to the fashionable, including actor Orson Welles, artist Salvador Dali and boxer Muhammad Ali.

“My life has been like the flight of a bird,” Maysles told a packed room at Manhattan’s St. Regis Hotel, where he was presented in 2006 with the George Arents Pioneer Medal, the University’s highest honor bestowed on alumni (now known as the Arents Award). “It’s been graced with great, great luck and uncertainty and adventure.”

At the same event, filmmaker Martin Scorsese—who had known Maysles since the 1960s and, at one point, briefly worked for him—added: “Everyone knows he’s a ‘pioneer.’ He’s the genuine article.”

Born in Boston to Jewish immigrants, Maysles briefly served in the U.S. Army, before earning degrees in psychology from Syracuse and Boston universities. Initially, he worked as a teacher, but the chance to travel to Russia, at the height of the Cold War, to make a documentary about mental hospitals proved life-changing.

Maysles began training in earnest under Robert Drew, a pioneer of cinéma vérité, which relied heavily on authentic dialogues and naturalness of action. With the advent of portable, lightweight sound and film equipment, Maysles helped usher in direct cinema, the United States’ answer to cinéma vérité.

The Maysles brothers’ “observational” approach, known for its delicacy and immediacy, enabled them to capture some of the most defining moments of the latter half of the 20th century. Chief among them was the stabbing of an 18-year-old fan by a Hell’s Angel at a Rolling Stones concert at Altamont Speedway in California, signaling the ideological end of the 1960s’ “peace and love” experiment.

Forty-five years on, the scene in which singer Mick Jagger views the raw footage of the killing still captivates.

“There’s nothing more harrowing than watching Jagger’s reaction, especially when he rewinds the editing machine and replays the murder scene in slow motion,” says David Yaffe, an award-winning author and assistant professor of the humanities in Arts and Sciences. “There’s also the single, unbroken shot of the Stones listening to a playback of ‘Wild Horses’—something that occurred a few days before the murder. It’s eerie and melancholy at the same time.” 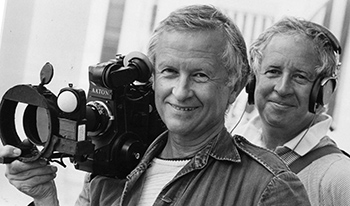 The Maysles brothers (Al on the left)

Says Yaffe: “It’s remarkable to think that, with all the coverage of the Rolling Stones, including films by Jean-Luc Godard and Martin Scorsese, ‘Gimme Shelter’ is the one we’re still talking about. Maysles was present for the apocalypse at Altamont and made the most of it. He really knew how to capture character.”

Maysles was active right up until his death, filming as recently as this past December. He had just completed work on “In Transit,” a documentary about the United States’ longest train route, which is scheduled to premiere next month at the Tribecca Film Festival. His eponymously titled film about fashion icon Iris Apfel, which premiered last fall at the New York Film Festival, opens next month, as well. The long-awaited self-portrait “Handheld and from the Heart” is also in production. More information about these and other related projects is available at http://mayslesfilms.com.

Maysles reunited with the University more than a decade ago. He gave multiple lectures at New York’s Joseph I. Lubin House, which presented various exhibitions of his films, photographs and equipment.

When grand-scale artists Christo and Jeanne-Claude installed more than 7,000 vinyl “gates” in nearby Central Park in 2005, Maysles was there to film the proceedings, later earning a Peabody Award for his efforts.

“Making a film isn’t finding the answer to a question; it’s trying to capture life as it is,” said Maysles, who, in 2014, was awarded the National Medal of Arts by President Obama.

Alan Bomser, Maysles’ attorney for more than 40 years, echoes these sentiments. “Al was an angelic presence who knew how to connect with people,” he adds. “He always had that camera on his shoulder, but you never knew if it was turned on or not. That’s how he got his best stuff.”

Maysles’ survivors include his wife of 39 years, Gillian Walker, and his children Rebekah, Philip, Sara and Auralice.

“My father always engaged with his subjects, although he believed he could be objective at the same time,” says Sara, co-author of “Grey Gardens” (Free News Projects, 2009) and a former Maysles Films archivist. “‘Love your subject,’ even if you disagree with their actions or beliefs, is something he often repeated to aspiring filmmakers.”

Donations in his memory may be sent to the Maysles Documentary Center at 343 Lenox Ave., New York, NY 10027.