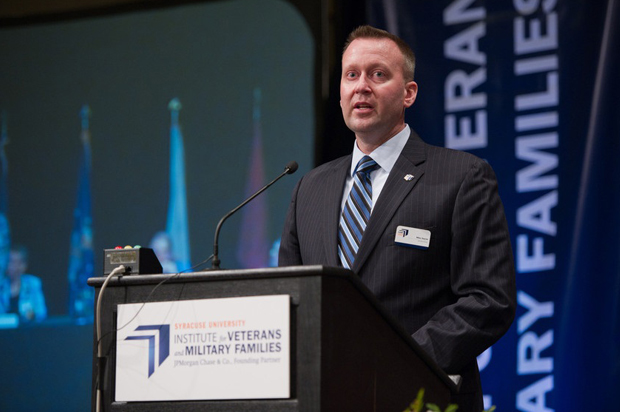 VA Secretary Robert McDonald launched the MyVA initiative in September 2014, as part of the department’s effort to better align the VA with the needs of the nation’s veterans, and to empower VA employees to improve the veteran experience. The MyVA Advisory Committee will provide advice to the secretary and VA leadership related to the department’s efforts to rebuild trust with veterans and other stakeholders, improve service delivery and set the course for longer-term excellence and reform.

Haynie serves as the vice chancellor for veterans and military affairs at Syracuse University, the executive director of the University’s Institute for Veterans and Military Families (IVMF) and the Barnes Professor of Entrepreneurship at the University’s Martin J. Whitman School of Management.

“I’m deeply honored and humbled to be appointed to this committee at this crucial time for our nation’s military veterans,” said Haynie. “As a veteran myself, I am excited for the opportunity to leverage all I have learned and enacted at Syracuse University on behalf of the nation’s veterans, to help the VA think broadly and strategically about how we better serve and empower veterans and their families.”

Haynie joined the faculty at Syracuse University in 2006, after serving 14 years as an Air Force officer. Shortly after joining the faculty, Haynie created the Entrepreneurship Bootcamp for Veterans with Disabilities (EBV) at the Whitman School. The success of the EBV program led to an expanded vision of how higher education could impact the lives of veterans and their families, and subsequently Haynie went on to launch the IVMF in 2011. The IVMF is the nation’s first interdisciplinary academic institute focused purposefully on informing and impacting the policy, economic, wellness and social concerns of the nation’s veterans and their families. Since its founding, the IVMF has come to be widely acknowledged as one of the nation’s leading centers of innovation and thought leadership related to the concerns of veterans. Last year, more than 24,000 veterans participated in the IVMF’s educational and vocational training program.

“We are proud that Secretary McDonald asked Mike Haynie to serve in this key position, at such a critical moment in the agency’s history,” said Syracuse University Chancellor Kent Syverud. “Mike is one of the nation’s top thought leaders on veterans’ issues. As a veteran, he’s passionate about working to create the conditions where our nation’s veterans can realize their full potential. Syracuse University has a long history of service to veterans, and Mike’s appointment to this important role adds another chapter to that legacy.”

The MyVA Advisory Committee will report directly to Secretary McDonald through its executive director. The MyVA effort is the largest department-wide transformation in the VA’s history; its goal is for every veteran to have a seamless, integrated and responsive VA customer service experience every time they interact with the department.