A professor in the College of Arts and Sciences has received a national award for his work on large-scale writing assessment.

Tony Scott, associate professor of writing and rhetoric, has received the Council of Writing Program Administrators (CWPA)’s Outstanding Scholarship Award. He is being recognized for his article “Democracy, Struggle, and the Praxis of Assessment,” which appeared in the December 2013 issue of College Composition and Communication (CCC), published by the National Council of Teachers of English. 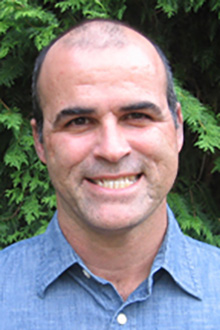 Scott co-authored the article with Lil Brannon, professor of English at the University of North Carolina at Charlotte.

“We’re very proud of Professor Scott, whose work stands at the nexus of large-scale assessment and everyday writing instruction,” says Lois Agnew, associate professor of writing and rhetoric, as well as chair and director of the Writing Program. “His article brilliantly draws on qualitative research to show the relationship between assessment, valuation and the economics of first-year writing.”

Scott will be honored in July at CWPA’s annual conference in Boise, Idaho.

“Nationwide, state legislatures are imposing assessment mandates to technocratize teaching, standardize curriculums and even change how college credit is awarded,” says Scott, a scholar of writing assessment, critical pedagogy and postsecondary writing labor issues. “Because large-scale writing assessments are not just a means of measurement, but also of organizing the work of teachers, we argue that any writing assessment should be held accountable for its curricular consequences and the theory of intellectual labor it deploys. Toward that end, the writing assessment model we describe adds qualitative elements to incorporate teaching labor and the contingency of standards into the analytical frame.”

Scott says both the terms of work for writing educators and the validity of writing program assessments are at issue in writing assessment. “A myopic focus only on reliably measured traits in students’ texts distorts the work of teaching and ignores the richness and scope of research-informed writing education,” he continues.

It’s not the first time that Scott has been recognized for the article. Last year, he and Brannon won the Conference on College Composition and Communication’s Richard Braddock Award for “Best CCC Article of the Year.”

“He argues that the analytical power of students’ writing is prevented from reaching its potential by pressures within the academy and without, which tend to wed higher education with the aims and logics of ‘fast capitalism,’” Agnew says.