Analyzing the University Campus: Its History, Spaces and a Plan for the Future

With all of its history, buildings and spaces, Syracuse University has developed its own unique sense of place over the past 145 years. The creation of a Campus Master Plan will help the University prepare for its future imprint. 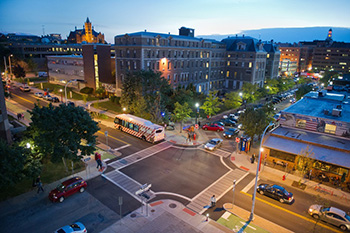 The creation of a Campus Master Plan will help the University prepare for its future imprint.

The iconic Hall of Languages, the framing of the Quad over time, the connection between University and city, and the many entry points to the campus are some of the pieces that have come to define the current campus.

A closer analysis by Sasaki Associates, with the Campus Master Plan Advisory Group and University community input, is looking at those areas in new ways.

“When you put that all together, you can see there’s a tremendous amount of opportunity for Syracuse in the future,” said Briana Hensold, senior associate planner at Sasaki, during one of the Hendricks Chapel presentations.

“There is a great history that has shaped a really intact main campus with a strong sense of landscape, strong sense of historic buildings, as well as contemporary architecture, that gives it a really unique sense of place,” Hensold said, “and then in the areas surrounding a real chance to take that identity and figure out how to strengthen it.”

The Campus Master Plan—or Campus Framework—is one of the three components of Fast Forward Syracuse, along with the Academic Strategic Plan and Operation Excellence. The Academic Strategic Plan sets the direction for the entire initiative with the Campus Master Plan Framework and Operational Excellence providing outcomes that will support the University’s academic mission.

For Sasaki and the Campus Master Plan Advisory Group, “The charge more clearly is to align the physical campus with the academic goals of the place and the student development goals,” Hensold said. Their work is closely tied to that of the development of the Academic Strategic Plan by the Strategic Planning Steering Committee, which is expected to have a first draft by early April.

Executive Vice President and Chief Financial Officer Louis Marcoccia, who sits on the various committees that make up Fast Forward Syracuse, said information from those working on the Strategic Plan is being shared with Sasaki and the Campus Master Plan Advisory Group.

“We are making sure that we’re integrating the components of Fast Forward Syracuse together, and the Academic Strategic Plan is the lead part of the three components,” Marcoccia said.

The Campus Master Plan will help the University make decisions for the future, he said. “This becomes a roadmap for us.”

In the fall, Sasaki presented its findings on the MyCampus survey, which generated 3,000 responses from the community members on how they use and move through the University campus.

Monday’s focus was on an analysis of the University’s history and its environment. Hensold described the evolution of campus from the initial Hall of Languages to “Old Row,” the buildings along University Place, and subsequent buildings and the definition of the Quad.

Hensold also highlighted research on the campus landscape with its many steep slopes, the topography and the weather patterns, including wind and snow that impact the spaces that are created. “There’s a lot that architecture and landscape can do to mitigate some of the harsh climate effects,” Hensold said.

The planning is also looking at parking areas and the ways people move on and off campus, including bike systems and city shuttles. Hensold said they are looking at areas of improvement to amenities at shuttle stops and frequency of shuttles.

The student experience is another area that Sasaki and the advisory group have received a lot of feedback about and one to which they are giving high priority. That includes community spaces, such as the Schine Student Center, and other public spaces where community is created among disciplines and imagination can be encouraged. “We want to make the most of those spaces,” Hensold said.

The analysis also includes reviewing the University’s “gateways,” such as Comstock Avenue, University Avenue, Skytop Road and West Campus, to make them more welcoming. For example, at Waverly and University avenues, there is a view of the back of Schine Student Center and a parking garage.

“We want to rethink how changes to some of those building facades could make that a more visually attractive place,” Hensold said.

Sasaki representatives will be back in April to talk about their ideas for the campus and get campus feedback, before a master plan is expected this summer.

The Campus Master Plan will include guiding principles and recommendations for campus architecture, landscape architecture, urban design, transportation, parking and utilities, as well as timelines and policies for implementation.

The plan will support the academic development of students, as well as their entire Syracuse University experience. “It’s also about development that happens outside of the classroom,” Hensold said.