Point of Contact Gallery will host an opening reception for “Darkness/Detritus/Illuminations,” an exhibition by Puerto Rican artist Eduardo Lalo on Thursday, March 26. The reception will take place from 6-8 p.m. and is free and open to the public. Refreshments will be served. Free parking is available the night of the reception in the Syracuse University lot on the corner of West and West Fayette streets. 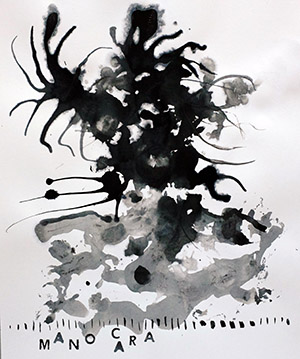 “Darkness/Detritus/Illuminations” includes ink drawings, black and white photographs and videos that explore the kinesthetic sensation of movement and of personal absence that takes place for an artist when creating works of art. Through a series of three poems and almost 100 works of art, Lalo examines the idea of eliminating the mind from the creation process and focusing on perpetual, almost obsessive, movements of the body as it forms gestures and marks. Lalo describes this action as a fundamental expression of what it is to be human and states that “to draw is to revisit ceaselessly this discontent and this finding.”

Born in Cuba in 1960 and raised in San Juan, Puerto Rico, Lalo is an internationally renowned novelist and poet, visual artist and educator. He completed his studies at Columbia University in New York and Université de la Sorbonne Nouvelle in Paris, and is currently a professor in the humanities at the University of Puerto Rico. His books combine hybrids of essay and fiction, which he integrates with visual arts (drawing and photography), essays and fiction in his published work.

Lalo became an internationally acclaimed literary figure in 2013 upon receiving the most prestigious award in the Hispanic-American literary world, the Rómulo Gallegos Award, for his novel “Simone.” A frequent columnist and literary critic in the San Juan-based 80 Grados, he is also a video artist of films including “donde” (2005) and “La ciudad perdida” (2006). Featured in dozens of exhibitions nationally and abroad, his photography and video work present an esoteric look at urban spaces through black and white images, sounds and narrative that capture the isolation of the post-industrialization era.