The Syracuse Area Music Awards (SAMMYs) has named David Rezak, director of the Bandier Program in the College of Visual and Performing Arts (VPA), its 2015 Music Educator of the Year. He will be honored on Thursday, March 5, at the SAMMYs sold-out Hall of Fame induction ceremony at the Dinosaur Bar-B-Que in Syracuse. 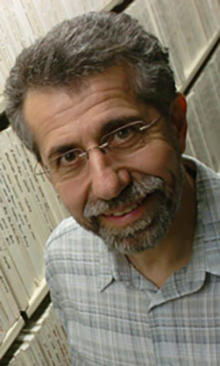 Rezak began managing musical groups in 1969 and in 1973 founded DMR Booking Agency, a respected regional talent agency and events production firm. In 1979, he became an advisor to and guest lecturer for the nascent music industry program at Syracuse University. He joined the music industry faculty in 1995, and with his students founded the Syracuse University Recordings and Marshall Street Records labels. He also initiated the Soyars Leadership Lecture Series, which puts top-level music executives in direct contact with students on a weekly basis.

In 2003, Rezak sold DMR and joined VPA full time to design a new music and entertainment industries curriculum. Launched in 2007 with a generous gift from SU Trustee and Sony/ATV Music Publishing Chairman and CEO Martin Bandier ’62, the multidisciplinary Bandier Program includes an understanding of the art of music, the business of music, media, marketing and entrepreneurship. Housed in VPA, the program includes course work in the S.I. Newhouse School of Public Communications, the Martin J. Whitman School of Management and the College of Arts and Sciences.

“What makes Professor Rezak a truly special person is that there is never a time when he isn’t trying to help us achieve our goals,” says Cormac Dennehy ’15, a Bandier Program major. “I meet with him from time to time, and he helps me come up with new ways to promote my a cappella group Otto Tunes. Others meet with him because he will help them find internships or jobs. He really cares for each and every one of us, including those of us who have graduated. He does all that he can to ensure that everyone is happy with their jobs and their life.”

Rezak also helped establish SU’s LA Semester, which launched in 2009 with participation of Bandier Program students. He is also co-chair of the audio arts graduate program in VPA and the Newhouse School, faculty advisor to WERW radio and mentor to University Union’s Concert Board.

Rezak was a charter board member of the SAMMYs and produced or co-produced several SAMMYs award shows. He was inducted into the SAMMYs Hall of Fame in 1999.