Design Students Connect Campus, City through ‘We Are Syracuse’ Billboards 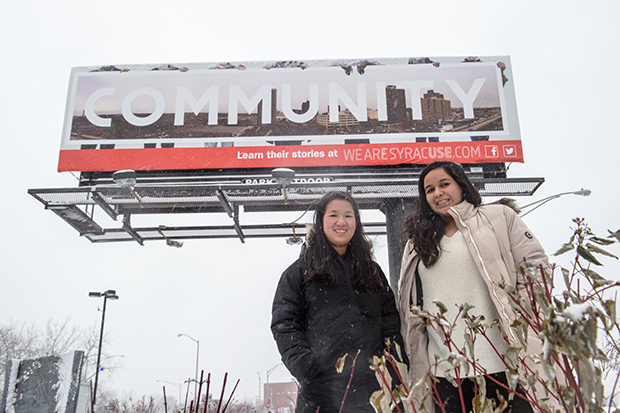 Tiffany Soohoo, left, and Karina Campos stand in front of their billboard in downtown Syracuse.

It was more than a year ago that the Connective Corridor issued a challenge to SU students: Design a large-scale public art project for a billboard series to be displayed over the 2014-15 academic year next to the Nancy Cantor Warehouse in downtown Syracuse. Use it to showcase campus-community connections. Make it interactive through a social media platform to spark conversation and engagement.

Students across disciplines formed teams to create imaginative proposals around the theme of connections. But one group stood out, led by Karina Campos ’17 and Tiffany Soohoo ’17. Their concept, “We Are Syracuse,” was based on composing a set of stories about people—both on campus and in the community—who make Syracuse unique. Their technique was equally creative. Pick a powerful word each month, and then set off on a journey across Syracuse to find people who embodied that word. Interview them and tell their story, using convergent media, with bold design, strong graphics and striking photography. Invite the community into the conversation to learn more.

Now, a year later, Campos, Soohoo and their team of photographers and videographers are seeing the results in a very big way.

“Seeing our billboard as part of the community is a really surreal experience,” says Campos. “As a designer you always dream of seeing your works displayed.”

Campos and Soohoo, both industrial and interaction design majors in the College of Visual and Performing Arts (VPA), came up with the idea for the billboards by doing a lot of research and thinking about design on a bigger scale, as part of a typography class they were taking. “We knew we wanted to incorporate some sort of typography, but knew that we did not want the whole billboard to be just words,” they say. “We wanted it to be clean, neat and easy to read while driving.”

But they also wanted it to do more. They wanted it to really explore how people make change by focusing on what makes community. The pair came up with the concept of featuring a different word each month. The first month, September, was “Passion,” then “Cuisine,” focusing on Syracuse’s growing local food movement. Other themes have been “Vibrant,” “Community” and “Evolving.”

The letters are held up by people whose faces are obscured. By visiting the website http://www.wearesyracuse.com, you can read a fuller story about the people and organizations they represent. For example, March’s billboard, “Spirited,” features, among others, David Holder of the Syracuse Convention and Visitor’s Bureau and Terry Baker of Syracuse in Focus, among others. A number of Syracuse University student leaders have also been featured in the series.

Campos says that each month they get recommendations from friends or past participants about individuals or groups to feature on future billboards. “We also take suggestions via our website email,” she adds. “We always have a running list of people or organizations we would like to showcase.”

“I hope that we are getting the community more excited and interested about the history and the people of Syracuse,” says Soohoo. “That is our goal for the project.”

A graphic of March’s billboard, “Spirited”

Soohoo and Campos say that their favorite part of the project has been learning more about Syracuse and connecting with the community. “It’s an amazing experience to learn about the city that I have been living in for the last two years,” Soohoo says.

“This billboard project has definitely taken me to visit some great locations around Syracuse. There are secret hidden gems all around the city,” adds Campos.

Campos and Soohoo have seen more than just their design skills grow throughout the process of putting the billboards together. They have had to learn to manage a team of student photographers, videographers and journalists. Many of the people working on the project are the pair’s friends. “One of our photographers is a biology major but does photography on the side,” says Soohoo. “We also have a writer who is a television-radio-film major in Newhouse, but who really likes writing.”

The multidisciplinary skill sets make for a richer perspective. Mentoring them has been Quinton Fletchall ’13, G’15, Connective Corridor program coordinator, who is also a part-time VPA instructor of design, a graduate student in communication and rhetorical studies, and a graduate of industrial and interaction design.

Along with the team they have built, Soohoo and Campos spend a lot of time on the project, which is spanning from September 2014 through May 2015. “Karina and I find the people, schedule the interviews, design the billboard and manage the website,” says Soohoo. “It’s a lot of work, but it shows us how jobs in the real world are.”

It has opened their eyes to the world in their backyard, but also in terms of career paths. Soohoo hopes to apply her richer knowledge of Syracuse as a University admissions ambassador, and as an intern this coming summer in the University’s Office of Community Engagement and Economic Development, which manages the Connective Corridor. “Through this project, I’ve really come to love the field of public design,” she says. “Doing my billboard project, I’ve met amazing people who are trying to revitalize the city every day. Their accomplishments are amazing and interesting.”

Soohoo adds that community engagement gives students the opportunity to broaden their connections and enhance the student experience. “The University and the city support each other. I find that the opportunities to succeed in Syracuse are endless.”

“This is the third year that Syracuse University students have been working with our office to create billboard series as part of the Connective Corridor,” notes University Vice President for Community Engagement and Economic Development Marilyn Higgins. “Past projects have included original student art produced in collaboration with the Onondaga Historical Association, as well as interactive projects that we have done with other Connective Corridor arts and cultural partners. It’s a great showcase for student creativity.”

“This is an excellent way for students to explore the city and connect with local community leaders who can be professional mentors and role models,” adds Linda Hartsock who manages the Connective Corridor for the University Office of Community Engagement and Economic Development. “The amount of time, energy and commitment the students invested in this project was amazing. It required an entrepreneurial approach, as well as organizational skills. They did a great job telling the stories of people who make Syracuse special.”

Ultimately, as they tell the “We Are Syracuse” story, Campos and Soohoo have found themselves becoming the heart of it.