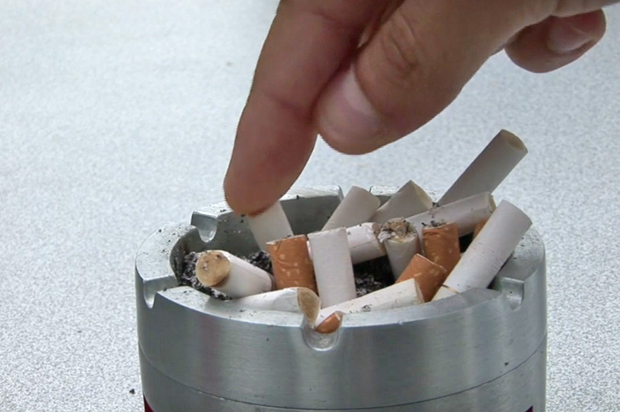 Cynthia Cary is facilitating several six-week smoking cessation programs for students and for faculty and staff.

Every smoker faces different challenges when trying to quit. The hardest part may be a matter of routine.

“This is the one behavior people have done on a regular basis probably longer than any other behavior,” says Cynthia Cary, a respiratory therapist and director of smoking cessation at SUNY Upstate Medical University in Syracuse.

“If you started when you were 15 or 16 years old, day after day, 15 to 20 times a day, you incorporate the habit in many ways in your everyday life—that first cup of coffee, driving, watching television, talking with friends,” Cary says. “Take cigarettes out of those situations and it changes up a lot of your day.”

Cary, who is a certified tobacco treatment specialist, understands the struggles many smokers face to kick the habit. She coordinates free community cessation programs and works with local employers to provide sessions for their employees.

At Syracuse University, Cary is facilitating several six-week cessation programs for students and for faculty and staff. The program is part of the effort to assist University community members in quitting smoking in anticipation of the University becoming a smoke-free and tobacco-free campus as of July 1.

But before smokers make that leap, Cary says the sessions will include information on the effects of smoking, how the addictive power of nicotine works and the proper use of cessation medication.

“We know medication can double the chances of successful quitting. If I only get one meeting with people, I can educate them on how much nicotine is delivered in a cigarette and how products work effectively to combat that addiction,” Cary says. “Oftentimes incorrect use of the various products is what has led to failure for many people.”

There are seven different Food and Drug Administration-approved cessation medications. Five are nicotine replacement: three over-the-counter medications that come in gum, lozenge and patch form; and two prescription forms, Nicotrol inhaler and nicotine nasal spray. The other two medications are pills and are non-nicotine medications.

“Your brain is accustomed to a particular amount of nicotine, and when it doesn’t get it, that’s when you get the withdrawal symptoms and people relapse,” Cary says.

These medicines replace the nicotine—without all of the other harmful chemicals from smoking—and decrease the amounts in gradually smaller proportions so people can transition much more easily than quitting cold turkey.

Crucial to any success, of course, is the smoker’s perspective. “The success of any attempt depends on how ready someone is to quit,” Cary says.

Two other medications—Wellbutrin and Chantix—work on brain receptors. Wellbutrin can be used with nicotine replacement and Chantix works by taking away the pleasurable sensation of smoking as well as preventing withdrawal symptoms. Participants have time to speak with their doctors and plan for some of these medications before quitting during Week 3.

“You’re walking around with less oxygen than your body needs to do its day-to-day functions. But the good news is when people quit, within 8 to 48 hours, the oxygen level goes back to normal,” Cary says.

Other health benefits of quitting smoking are:

Smokers are also more likely to develop wrinkles faster than people who don’t smoke and have higher rates of erectile dysfunction.

Cary also informs participants that they are welcome to gather all the information in the first two sessions, but by the quit day (the third week), the group has formed relationships, so if a person is not ready to quit, it would be better for that person to drop out and wait until the next round of classes.

Those who don’t quit are always welcome to return to another six-week session. “It’s about progress, not perfection. Do the best you can and keep moving forward,” Cary says.

After the quit day, the other sessions provide information about the psychological aspects of being a new non-smoker, being prepared for triggers and resources to help support people through the process.

“One of the messages I try to leave with people is that they didn’t learn how to do this overnight,” Cary says. “Now we have to unlearn this behavior and that takes some work. The class is just the beginning.”